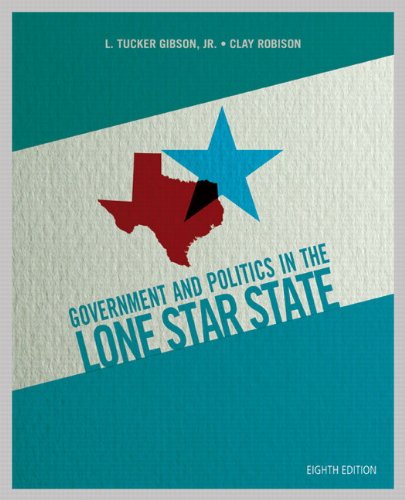 Government and Politics in the Lone Star State by L. Tucker Gibson

Government and Politics in the Lone Star State by L. Tucker Gibson

An accessible look at Texas politics

Written to be both engaging and accessible, Government and Politics in the Lone Star State?offers both a journalist's and a political scientist's?perspective in?its coverage of the economic, demographic, political, and social changes contributing to contemporary Texas?politics.?Using theory, scholarly research, first-hand observations, anecdotes - and always a bit of humor - the authors examine the nuances of change in political behavior and the decisions of political actors at the state and local levels.

Fully revised to meet the 2306 curriculum changes,Government and Politics in the Lone Star State, 8e, contains 13 chapters - a full semester's worth of Texas Government content.? The eighth edition features the same pedagogical features students currently enjoy in traditional American Government textbooks, extending their learning experience from the 2305 course seamlessly into 2306.

Upon completing this book, readers will be able to:

Note: MyPoliSciLab does not come automatically packaged with this text. To purchase MyPoliSciLab, please visit:

www.mypoliscilab.com or you can purchase a valuepack of the text + MyPoliSciLab (at no additional cost): ValuePack ISBN-10: 0205926010

L. Tucker Gibson, Jr. is Professor Emeritus at Trinity University, where he served as chair of the Political Science department from 1995-2006. He taught courses on state and local government, American politics, political parties, interest groups, and public policy. He has worked as a consultant on mayoral and city council races as well as more than thirty redistricting projects for local governments. His research focuses on Texas politics and government, single-member districting in Texas school districts, and San Antonio politics.

Clay Robison covered Texas government and politics for more than 27 years as a reporter, Austin Bureau chief and columnist for the Houston Chronicle. He now is a public affairs specialist for a professional trade association in Austin, where he continues to report and blog on education and politics.

Chapter 1: The Social and Economic Milieu of Texas Politics

Challenges of the Twenty-First Century

The Myths of Texas

The Political Culture of Texas

The People of Texas

General Principles of the Texas Constitution

Weaknesses and Criticisms of the Constitution of 1876

The Impact of Federalism on State Finances

Reactions to the Expanded Role of the Federal Government

What are Interest Groups?

Interest Groups from a Theoretical Perspective

Interest Groups and the Policymaking Process

The Mass Media and the Electoral Process

The Development of the Media in Texas

How Well Informed Are Texas Voters?

Chapter 6: The Party System in Texas

Political Parties and a Democratic Society

The Functions of Political Parties: Intermediaries between the Electorate and Government

The Party in the Electorate

Differences between Republicans and Democrats

The Party in Government

The Functions of Elections

Political Suffrage in Texas: A Struggle for Minorities and Women

Political Gains by Minorities and Women

Organization of the Texas Legislature and Characteristics of Members

Rules and the Lawmaking Process

A Historical Perspective on the Executive Function in Texas

The Governor in the Plural Executive

The Powers of the Governor

Informal Resources of the Governor

Other Offices of the Plural Executive

The Growth of Government Employment in Texas

Political Control and the Responsiveness of the Bureaucracy

Chapter 11: The Judicial System in Texas

The Legal Framework of the Texas Judiciary

The Structure of the Texas Court System

Changing the Face of the Judiciary

Judiciary Controversies and the Search for Solutions

Solutions to the Problems of Local Government

CIN000237052
9780205927067
0205927068
Government and Politics in the Lone Star State by L. Tucker Gibson
L. Tucker Gibson
Used - Very Good
Paperback
Pearson Education (US)
2012-08-01
480
N/A
Book picture is for illustrative purposes only, actual binding, cover or edition may vary.
This is a used book - there is no escaping the fact it has been read by someone else and it will show signs of wear and previous use. Overall we expect it to be in very good condition, but if you are not entirely satisfied please get in touch with us
Trustpilot