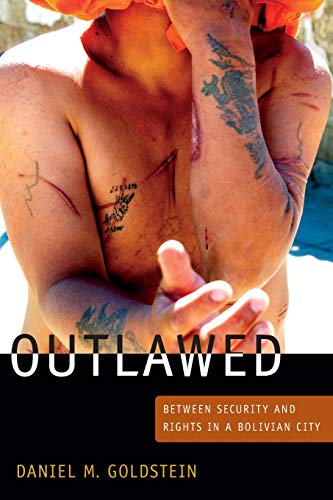 An ethnography examining how indigenous residents of crime-ridden, marginalized neighborhoods in Cochabamba, Bolivia, struggle to balance human rights with their need for safety and security.

Outlawed: Between Security and Rights in a Bolivian City by Daniel M. Goldstein

Daniel M. Goldstein is Associate Professor in the Department of Anthropology at Rutgers University. He is the author of The Spectacular City: Violence and Performance in Urban Bolivia and a coeditor of Violent Democracies of Latin America, both also published by Duke University Press.

Acknowledgments ix
1. Security, Rights, and the Law in Evo's Bolivia 1
2. Getting Engaged: Reflections on an Activist Anthropology 35
3. The Phantom State: Law and Ordering on the Urban Margins 77
4. Exorcising Ghosts: Managing Insecurity in Uhspa Uhspa 121
5. Community Justice and the Creative Imagination 167
6. Inhuman Rights? Violence at the Nexus of Rights and Security 203
7. An Uncertain Anthropology 239
Notes 257
References 281
Index 305
NLS9780822353119
9780822353119
0822353113
Outlawed: Between Security and Rights in a Bolivian City by Daniel M. Goldstein
Daniel M. Goldstein
The Cultures and Practice of Violence
New
Paperback
Duke University Press
20120821
344
N/A
Book picture is for illustrative purposes only, actual binding, cover or edition may vary.
This is a new book - be the first to read this copy. With untouched pages and a perfect binding, your brand new copy is ready to be opened for the first time
Trustpilot