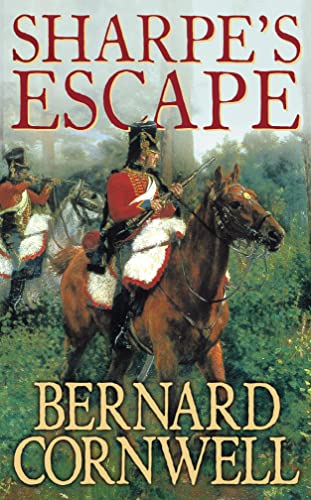 The twentieth instalment in the bestselling Sharpe series.

The twentieth instalment in the bestselling Sharpe series.

It is 1810 and the French are making yet another attempt to invade Portugal. Facing them is a wasted land, stripped of food by Wellington's orders, and captain Richard Sharpe.

But Sharpe is in trouble. His job as Captain of the Light Company is under threat and he has made a new enemy, a Portuguese criminal known as Ferragus. Sharpe, discarded by his regiment, wages a private war against Ferragus - a war fought through the burning, pillaged streets of Coimbra, Portugal's ancient university city. Sharpe's enemies are numerous but on his side he has Sergeant Patrick Harper, the Portuguese officer Jorge Vincent and a prickly English governess, whose first aim is to clean up Sharpe's language.

Sharpe's Escape begins on the great, gaunt ridge of Bussaco where a joint British and Portuguese army meets the overwhelming strength of Marshall Massena's crack troops. It finishes at Torres Vedras where the French hopes of occupying Portugal quickly die.

This is a classic Sharpe novel, with Richard Sharpe in his finest form reunited with Patrick Harper, and facing enemies on every side.

'The Richard Sharpe novels are notable for their wonderfully astringent view of history. Sharpe is a man first and a patriot second: he is as likely to pick a fight with one of his own side as charge blindly towards the enemy.' Sunday Telegraph

'No one is better than Bernard Cornwell in describing battles large and small, howitzer fire, cavalry charges or bayonet attacks.' Evening Standard

Bernard Cornwell worked for BBC Television for seven years, mostly as a producer on the Nationwide programme, before taking charge of the Current Affairs department in Northern Ireland. In 1978 he became editor of Thames Television's Thames at Six. Married to an American, he now lives in the United States.

GOR000970833
9780007120147
0007120141
Sharpe's Escape: The Bussaco Campaign, 1810 (The Sharpe Series, Book 10) by Bernard Cornwell
Bernard Cornwell
The Sharpe Series
Used - Very Good
Paperback
HarperCollins Publishers
20041101
448
N/A
Book picture is for illustrative purposes only, actual binding, cover or edition may vary.
This is a used book - there is no escaping the fact it has been read by someone else and it will show signs of wear and previous use. Overall we expect it to be in very good condition, but if you are not entirely satisfied please get in touch with us
Trustpilot