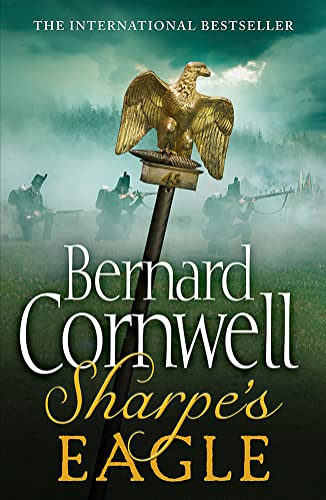 *The brand new novel in the global bestselling series, SHARPE'S ASSASSIN, is available to buy now*

*The brand new novel in the global bestselling series, SHARPE'S ASSASSIN, is available to buy now*

Lieutenant Richard Sharpe faces not only great danger on the battlefield but also, even more dangerous, treachery within his own ranks. But as the enemy approaches, he must pick up his rifle and prepare to lead his men against the French at one of the biggest, bloodiest fights of the war - the Battle of Talavera.

Out of the mist comes the roaring, undefeated army sent by Emperor Napoleon. Over their heads soar the Eagles, the standards touched by the hand of the Emperor himself. And boldly waiting for them is Sharpe . . .

GOR003626954
9780007425891
0007425899
Sharpe's Eagle: The Talavera Campaign, July 1809 (The Sharpe Series, Book 8) by Bernard Cornwell
Bernard Cornwell
The Sharpe Series
Used - Good
Paperback
HarperCollins Publishers
2011-09-15
336
N/A
Book picture is for illustrative purposes only, actual binding, cover or edition may vary.
This is a used book - there is no escaping the fact it has been read by someone else and it will show signs of wear and previous use. Overall we expect it to be in good condition, but if you are not entirely satisfied please get in touch with us
Trustpilot