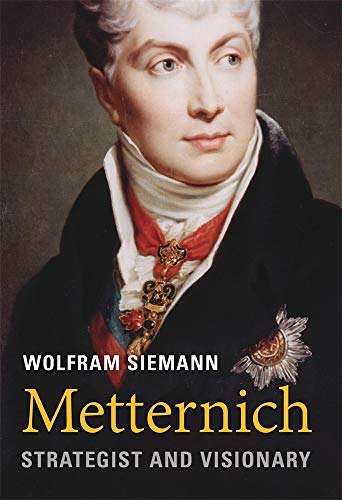 Wolfram Siemann tells a new story of Clemens von Metternich, the Austrian at the center of nineteenth-century European diplomacy. Known as a conservative and an uncompromising practitioner of realpolitik, in fact Metternich accommodated new ideas of liberalism and nationalism insofar as they served the goal of peace. And he promoted reform at home.

A compelling new biography that recasts the most important European statesman of the first half of the nineteenth century, famous for his alleged archconservatism, as a friend of realpolitik and reform, pursuing international peace.

Metternich has a reputation as the epitome of reactionary conservatism. Historians treat him as the archenemy of progress, a ruthless aristocrat who used his power as the dominant European statesman of the first half of the nineteenth century to stifle liberalism, suppress national independence, and oppose the dreams of social change that inspired the revolutionaries of 1848. Wolfram Siemann paints a fundamentally new image of the man who shaped Europe for over four decades. He reveals Metternich as more modern and his career much more forward-looking than we have ever recognized.

Clemens von Metternich emerged from the horrors of the Revolutionary and Napoleonic wars, Siemann shows, committed above all to the preservation of peace. That often required him, as the Austrian Empire's foreign minister and chancellor, to back authority. He was, as Henry Kissinger has observed, the father of realpolitik. But short of compromising on his overarching goal Metternich aimed to accommodate liberalism and nationalism as much as possible. Siemann draws on previously unexamined archives to bring this multilayered and dazzling man to life. We meet him as a tradition-conscious imperial count, an early industrial entrepreneur, an admirer of Britain's liberal constitution, a failing reformer in a fragile multiethnic state, and a man prone to sometimes scandalous relations with glamorous women.

Hailed on its German publication as a masterpiece of historical writing, Metternich will endure as an essential guide to nineteenth-century Europe, indispensable for understanding the forces of revolution, reaction, and moderation that shaped the modern world.

A superb biographical portrait and work of historical analysis...Basing his account on a wealth of new documentation from the family archive, Siemann locates the man firmly within the intertwined history of the Holy Roman Empire and the Habsburg monarchy...The most comprehensive, absorbing and authoritative biography of the man we have, defying the stereotypes that usually adhere to him. Let us hope that it will serve if not as a manual then at least as an inspiration-good statesmanship is needed more than ever. -- Brendan Simms * Wall Street Journal *
This impressive biography is welcome. It covers every aspect of Metternich's life with a wealth of detail, and dishes up some delightful gems... The real strength of the book lies in its coverage of the internal politics of the Habsburg Empire, Metternich's attempts to reorganize it, and the power struggles at its heart after the death of Emperor Francis I in 1835. -- Adam Zamoyski * The Times *
[An] evocative and deeply researched biography...Siemann brilliantly refreshes our understanding of Metternich and his era...Metternich was an intellectual in politics of a kind now rare in the modern world...And Siemann is as good on his subject's emotional life as on his intellectual life. -- Christopher Clark * London Review of Books *
A very extensive and well-researched chronicle of the subject's monumental career...Metternich deserves, and here thoroughly receives, re-examination. It's a biography for anyone who seriously wants to learn about its remarkable subject. * The Spectator *
The culmination and encapsulation of a life's work...it is a running joy, full of winking sidelights and delightful detours. * Times Literary Supplement *
Vast in scope and profound in learning, Wolfram Siemann's masterpiece, deftly translated by Daniel Steuer, refreshes every theme it touches and situates its protagonist in a landscape charged with texture and new meaning. At its center is a compelling and humane portrait of one of the most gifted and interesting statesmen of modern times. But this is more than a biography-it is a window into the heart of Europe's nineteenth century. -- Christopher Clark, author of Iron Kingdom and The Sleepwalkers
Magisterial...As well as providing a first-rate intellectual biography and a spirited defense of his policies, Siemann reveals Metternich to us as a man of flesh and blood...If great biography, like great literature, permits us to peer into another person's soul, then Siemann has succeeded admirably. The portrait of Metternich that emerges is one of a cosmopolitan rationalist and problem solver with empathetic qualities, rather than the die-hard reactionary of legend...As new tensions between the forces of nationalism and globalization emerge in our own day, Metternich's efforts appear more relevant than ever. -- Mark Jarrett * Literary Review *
Succeed[s] in forcing readers to wonder whether Metternich's efforts to defend an essentially conservative order against populists and terrorists are so different from the struggles that liberal democracies face today. -- Andrew Moravcsik * Foreign Affairs *
The first independent treatment of Metternich in the modern era. This was long overdue, and the scale of Siemann's accomplishment would be hard to overstate...Siemann's greatest achievement, however, lies in bringing new evidence to bear that changes our view of Metternich the statesman...Magnificent and fun to read...Metternich's wait for a historian to properly judge his place in history took longer than he probably expected. But in Wolfram Siemann, he got his man. -- A. Wess Mitchell * Standpoint *
[An] engaging and comprehensive biography...Excellent...Siemann has greatly advanced our knowledge of and admiration for [Metternich]. -- Andrew Roberts * New Criterion *
One of the best biographies to appear on the American market in 2019...[An] enormously interesting life of the great diplomat. * Open Letters Review *
In an era when supposedly benevolent interventions in other people's countries have once again become fashionable, the case for leaving things alone needs to be made...This is why [Metternich] remains important...Fascinating. -- Peter Hitchens * First Things *
So rich is this wonderful book in insight and information, so brilliantly does it illuminate Metternich's exciting times, that no review can hope to do justice to its author's achievement. Every general history of the period between the outbreak of the French Revolution and the revolutions of 1848 will need to be rewritten. It is a long book, but consistently stimulating, entertaining, even enthralling. -- Tim Blanning * GHIL Bulletin *
[An] excellent biography...An exhaustive work of scholarship intended to set the historical record straight...History has credited him with crafting much of the European peace that lasted between 1815 and 1914; he deserves much more, and Siemann has given it to him. * Washington Examiner *
A great reassessment of one of the most dazzling and controversial statesmen of the nineteenth century. * Lesart *
A masterpiece. * Neue Zurcher Zeitung *
This outstanding German historian offers the definitive biography of the Austrian statesman and completely collapses our negative image of him-a brilliant book that leaves nothing to be desired. * NRC Handelsblad *
A work of unusual clarity and depth. * Choice *
Should long serve as the standard biography. -- James Baresel * University Bookman *
Very few historical figures have played so integral a role in so many events of world-historic importance...A profoundly engaging work of such depth and breadth that it is often possible to see Metternich more as a framing device for a sprawling history of the German region in a period of profound change...What Wolfram Siemann achieves in this magisterial work is to present Metternich as a man of his time. -- Bodie A. Ashton * German History *
Siemann is the first biographer to mine Metternich's family archive in Prague...Compels us to rethink virtually every aspect of Metternich's career...Likely to be the standard life of Metternich for a very long time. -- Jack Cunningham * International Journal *
Wolfram Siemann, one of Germany's leading historians of the nineteenth century, is Professor Emeritus for Modern and Contemporary History at the Ludwig Maximilian University of Munich.
NPB9780674743922
9780674743922
067474392X
Metternich: Strategist and Visionary Wolfram Siemann
Wolfram Siemann
Neu
Gebundene Ausgabe
Harvard University Press
20191129
928
N/A
Die Abbildung des Buches dient nur Illustrationszwecken, die tatsächliche Bindung, das Cover und die Auflage können sich davon unterscheiden.
Dies ist ein neues Buch - lesen Sie als Erster dieser Kopie. Mit unberührten Seiten und einer perfekten Bindung kann Ihre brandneue Kopie zum ersten Mal geöffnet werden.