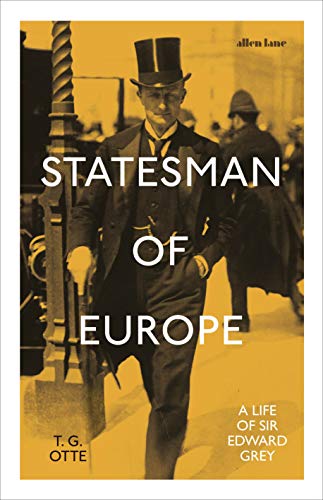 A NEW STATESMAN BOOK OF THE YEAR 2020

'The lamps are going out all over Europe. We shall not see them lit again in our life-time.' The words of Sir Edward Grey, looking out from the windows of the Foreign Office in early August 1914, are amongst the most famous in European history, and encapsulate the impending end of the nineteenth-century world.

The man who spoke them was Britain's longest-ever serving Foreign Secretary (in a single span of office) and one of the great figures of late Victorian and Edwardian Britain. Statesman of Europe is a magnificent portrait of an age and describes the three decades before the First World War through the prism of his biography, which is based almost entirely on archival sources and presents a detailed account of the main domestic and international events, and of the main personalities of the era. In particular, it presents a fresh understanding of the approach to war in the years and months before its outbreak, and Grey's role in the unfolding of events.

outstanding ... Otte's colossal, learned and measured book presents a powerful case for the defence ... It is true that Grey failed to avert war, but probably nobody could have succeeded. As Otte's excellent book shows, he did his best. -- Dominic Sandbrook * Sunday Times *
No biography of Grey has ever been so thorough and scholarly as this -- Simon Heffer * Sunday Telegraph *
If you read just one book of history this Christmas, it should be T.G. Otte's re-evaluation in Statesman of Europe: A Life of Sir Edward Grey. This beautifully written biography of one of the most humane, perceptive and intelligent diplomats is a wistful reminder of what Britain might have been like if Lloyd George had not destroyed the Liberal party. -- Jonathan Sumption * Spectator Books of the Year *
a magisterial account that is unlikely to be bettered -- Martin Pugh * Times Literary Supplement *
T.G. Otte's Statesman of Europe: A Life of Sir Edward Grey is magnificent - its depth of analysis formidable and its humanity moving. -- Spectator Books of the Year * Allan Mallinson *
a very well written and comprehensive ... This scholarly, readable and objective book will be the standard biography of Sir Edward Grey for decades to come. It triumphantly gives him his proper desserts as an eminent Edwardian gentleman who did his best to save his country from what he knew would be a catastrophic war -- Andrew Roberts * The Critic *
In Statesman of Europe - the first full biography for half a century - T. G. Otte offers a sensitive and elegant portrait of our longest-serving foreign secretary (11 years on the trot): a politician whose principled pragmatism and sense of civic duty strike an appealing, if elegiac, note in 2020. -- David Reynolds * New Statesman Books of the Year *
Thomas Otte, in this compendious and elegant biography, paints a portrait of a deeply moral, patient and conscientious figure who did not love the world of high politics, but felt it his duty to pursue a role in public life and did so for 48 years. ... Otte's is a rich and rounded portrait of Grey, whom he restore[s] to his place as a humane and dutiful Liberal politician of the old school -- Paul Lay * The Times *
This book is a reading for our times. It is a stalwart defence of politics as the careful, sensitive and pragmatic management of constant change, and of political history as an education in these truths ... it makes a significant mark. -- Jonathan Parry * London Review of Books *
an outstanding biography, beautifully written, richly documented and persuasively argued ... Otte has given us a superb biography of this important figure. Statesman of Europe is sub-titled A Life of Sir Edward Grey. For the foreseeable future it is likely to be the life of Sir Edward Grey. -- David Dutton * Journal of Liberal History *
Otte has already made a name for himself with a series of books and publications on British foreign policy, and this biography, Statesman of Europe (2020), can be regarded as the provisional crown on his work. -- Beatrice de Graaf * NRC Handelsblad *
Edward Grey belonged to an era when British foreign policy carried global consequences. Most importantly, in July 1914 he led international efforts to forestall war. In T.G.Otte, Grey has found a historian whose fluency, scholarship and empathy match his subject's principled and pragmatic diplomacy. Otte unravels Grey's enigmas - his marriage, his preference for rural life over politics and above all his thinking on war and peace. In Statesman of Europe, now much the fullest and most authoritative account of Grey's life, he has brought to the man the poise and balance that Grey sought for his country. -- Sir Hew Strachen
Thomas Otte is Professor of Diplomatic History at the University of East Anglia and a leading historian of British foreign policy. He is the author or editor of some eighteen books, including the acclaimed July Crisis:The World's Descent into War, Summer 1914 and The Foreign Office Mind: The Making of British Foreign Policy 1865-1914. He has been an adviser to the Foreign and Commonwealth Office.
NGR9780241413364
9780241413364
0241413362
Statesman of Europe: A Life of Sir Edward Grey T. G. Otte
T. G. Otte
Neu
Gebundene Ausgabe
Penguin Books Ltd
2020-11-26
896
N/A
Die Abbildung des Buches dient nur Illustrationszwecken, die tatsächliche Bindung, das Cover und die Auflage können sich davon unterscheiden.
Dies ist ein neues Buch - lesen Sie als Erster dieser Kopie. Mit unberührten Seiten und einer perfekten Bindung kann Ihre brandneue Kopie zum ersten Mal geöffnet werden.