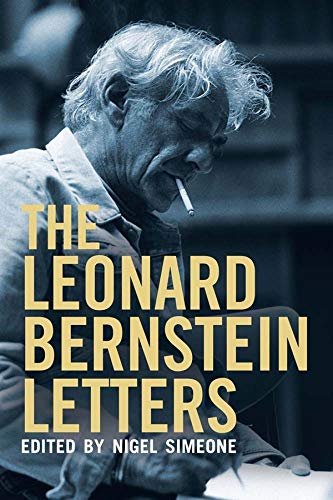 Leonard Bernstein was a charismatic and versatile musician-a brilliant conductor who attained international super-star status, and a gifted composer of Broadway musicals (West Side Story), symphonies (Age of Anxiety), choral works (Chichester Psalms), film scores (On the Waterfront), and much more. Bernstein was also an enthusiastic letter writer, and this book is the first to present a wide-ranging selection of his correspondence. The letters have been selected for the insights they offer into the passions of his life-musical and personal-and the extravagant scope of his musical and extra-musical activities. Bernstein's letters tell much about this complex man, his collaborators, his mentors, and others close to him. His galaxy of correspondents encompassed, among others, Aaron Copland,Stephen Sondheim, Jerome Robbins, Thornton Wilder, Boris Pasternak, Bette Davis, Adolph Green, Jacqueline Kennedy Onassis, and family members including his wife Felicia and his sister Shirley. The majority of these letters have never been published before. They have been carefully chosen to demonstrate the breadth of Bernstein's musical interests, his constant struggle to find the time to compose, his turbulent and complex sexuality, his political activities, and his endless capacity for hard work. Beyond all this, these writings provide a glimpse of the man behind the legends: his humanity, warmth, volatility, intellectual brilliance, wonderful eye for descriptive detail, and humor.
"With their intellectual brilliance, humour and wonderful eye for detail, Leonard Bernstein's letters blow all biographies out of the water. His galaxy of correspondents includes Stephen Sondheim, Boris Pasternak and Jacqueline Kennedy. Full of fresh information and the authentic voice of a constant seeker."-The Economist (named a 2013 Book of the Year) * The Economist *
"His collaborator Betty Comden once noted, in a letter to Bernstein, that he saved 'every scrap of correspondence.' You will be grateful . . . a rich collection of letters to and from Bernstein, filled with revelations about his musical and personal lives."-James R. Oestreich, New York Times -- James R. Oestreich * New York Times *
"Bernstein's versatility and ambition were such that he spent a lot of time trying to figure out who he was-which also meant searching for American music and for the future of music generally. This book doesn't resolve Bernstein's quest. But it's an invaluable resource, and the quest itself continues to fascinate and to matter." -Joseph Horowitz, The Wall Street Journal -- Joseph Horowitz * The Wall Street Journal *
"The correspondence from and to the remarkable conductor is full of pleasure and insights."-New York Times Book Review (Editors' Choice) * New York Times Book Review *
"Exhaustive, thrilling [and] indispensable."-Elysa Gardner, USA Today, starred review -- Elysa Gardner * USA Today *
"Energetic, intimate . . . an eye-opening volume: a glimpse into the personal life of a legend."-Jeff Lunden, NPR "Weekend Edition Sunday" -- Jeff Lunden * NPR "Weekend Edition Sunday" *
"Bernstein emerges as highly literate, compassionate, astonishingly busy and gifted almost beyond measure."-Kirkus Reviews (starred review) * Kirkus Reviews *

"A hugely entertaining chronicle of a enviable life, and a trove of musical and show-business gossip."-Adam Kirsch, The New Republic

-- Adam Kirsch * The New Republic *
"What terrifying letters you write: fit for the flames is what they are. Just imagine how much you would have to pay to retrieve such a letter forty years from now when you are conductor of the Philharmonic."-Aaron Copland to Leonard Bernstein in 1940
-- Aaron Copland
"[It's] full of both serious and gossipy correspondence between the musical genius and such friends as Stephen Sondheim, Betty Comden and Aaron Copland."-Joe Meyers, CTNews.com -- Joe Meyers * CTNews.com *
"This incredible collection of letters gives us a glimpse into the depth and breadth of Bernstein's world. The sheer volume of correspondence, all beautifully presented and annotated by Nigel Simeone, shows us that Bernstein loved the written word as much as the musical word!"-Marin Alsop, musical director, The Baltimore Symphony Orchestra -- Marin Alsop
"A document of a golden age."-Jimmy So, The Daily Beast -- Jimmy So * The Daily Beast *
"The book - consisting of 650 letters both from and to Bernstein, dated between 1932 and 1990 - is not merely interesting. It is fascinating, enlightening and a veritable page-turner that will keep you up nights, ruin your sleep and wreak all sorts of havoc for 600 pages."-Steve Suskin, Playbill -- Steve Suskin * Playbill *

"His letters have a tremendous zest, and a good journalistic eye, too, and since he was often at the right place at the right time, at some of the key moments in his 20th-century history, this gives them a wider interest."-Christopher Hart, The Sunday Times

-- Christopher Hart * The Sunday Times *
"A marvelously entertaining new book . . . The Leonard Bernstein Letters makes it possible to take stock of Bernstein's weaknesses-his enthusiasm could lead to sentimentality, and clearly his fame became a kind of bubble. But these pale in comparison with his energy, joy, and absolute dedication to music. It's sad to think that our culture will probably never produce someone like him again." -Adam Kirsch, Tablet magazine -- Adam Kirsch * Tablet magazine *

"The Leonard Bernstein Letters. . .contains so much that is startling and unknown that all past books, including his own, become instantly inadequate. Don't take my word for it. On the jacket, Bernstein's official biographer, Humphrey Burton, declares that, with this book in hand, 'I want to start all over again.'"-Norman Lebrecht, Standpoint Magazine

-- Norman Lebrecht * Standpoint Magazine *
"Simeone's choice of letters [are] superbly amplified by his exhaustively researched footnotes, which manage to identify and flesh our even the most obscure of his subject's multifarious correspondents."-Stephen Walsh, The Spectator -- Stephen Walsh * The Spectator *
"In Nigel Simeone's editorial labour of love The Leonard Bernstein Letters some of the most entertaining letters come from Bernstein's correspondents."-Sameer Rahim, The Sunday Telegraph -- Sameer Rahim * The Sunday Telegraph *
"Like Britten, Bernstein was an assiduous correspondent, and The Leonard Bernstein Letters is a vast, absorbing canvas of a life lived at full speed, with a cast list that reads like a who's who of American cultural life in the 20th century."-Adam Lively, The Sunday Times -- Adam Lively * The Sunday Times *
"Magnificent and long-awaited."-Maria Popova, Brain Pickings -- Maria Popova * Brain Pickings *
"This anthology of Bernstein's correspondence, assembled by Nigel Simeone, shines a light on the famous conductor and composer's private thoughts."-WQXR.org * WQXR.org *
"For. . .eloquent and moving testimony read the entry for 25 November 1963 in The Leonard Bernstein Letters edited by Nigel Simeone, the contents of which give an. . .overview of a liberal American century."-Chris Ford, The Guardian -- Chris Ford * The Guardian *
"[Bernstein's] manifold legacy, including these letters, lives on."-John Simon, The Weekly Standard -- John Simon * Weekly Standard *

"The . . .mainly unpublished correspondence both from and to Bernstein, between 1932 and 1990, shines a light on this unique figure's thoughts, work and passions, his voice ringing clear with warmth and candour. . .he was a remarkable artist and human being - elusive in his complexity, yet evoked, through these letters, with undeniable presence."-Teresa Levonian Cole, Country Life

-- Teresa Levonian Cole * Country Life *
"Simeone has manages to encapsulate a central tradition in the history of music of the last century as seen through the correspondence of one of its most important exponents."-Paul Seydor, Absolute Sound -- Paul Seydor * Absolute Sound *
"Opens a window into the world of one of the most accomplished and brilliant artists of the 20th century."-Irene Javors, The Harvard Gay and Lesbian Review -- Irene Javors * The Harvard Gay and Lesbian Review *
"Time and again, The Leonard Bernstein Letters demonstrate how the composer and conductor lived in overdrive."-Carol Oja, Harvard Magazine -- Carol Oja * Harvard Magazine *
'A rich selection of letters to and from Bernstein, meticulously edited by Nigel Simeone. . .Alive with spontaneous intelligence, Leonard Bernstein's letters display exactly this unforced intimacy, though there were moments when he no doubt knew that posterity was listening in.'
-Morris Dickstein, TLS -- Morris Dickstein * TLS *

Nigel Simeone is well known as a writer and speaker on music and is the author of several books including Leonard Bernstein: West Side Story. He lives in Northamptonshire, UK.