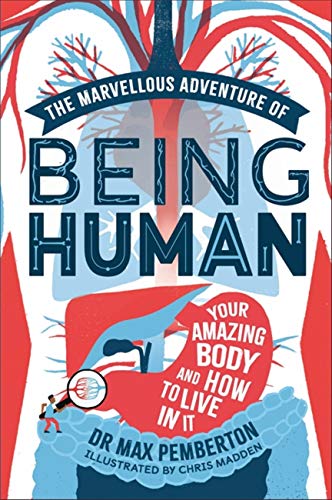 The Marvellous Adventure of Being Human Max Pemberton

A human body book with a difference: bestselling author and doctor takes us on a trip through our amazing anatomy while emphasising his great tips for staying happy and healthy.

The Marvellous Adventure of Being Human: Your Amazing Body and How to Live in it Max Pemberton

Join Doctor Max Pemberton as he takes you on a marvellous adventure around the human body!

Shrink yourself down as small as you can go. No - much smaller than that! You'll need to be small enough to crawl up nostrils, peer inside eyeballs and float through the bloodstream, because we're about to embark on an amazing trip through your awesome anatomy.

On our travels we'll discover startling facts about how our bodies work and why they're so extraordinarily special. And that's not all - Dr Max will be on hand to help you feel your best with his expert body boosting tips on living and eating well.

So grab your magnifying glass and stethoscope, and let's set off on our marvellous adventure of being human!

Max Pemberton (Author)
Max Pemberton is a doctor, journalist and writer. Over the course of his medical career he has worked across a broad range of medicine, including paediatrics, mental health, surgery and geriatrics.

Max is a writer for the Daily Mail, Reader's Digest, and the Spectator. Before moving to the Mail three years ago, he was a columnist at the Daily Telegraph for 12 years. He has won several awards for his writing, including Mind Journalist of the Year, the Royal College of Psychiatrists Public Educator of the Year and awards from the Medical Journalists' Association. He has presented the BBC Radio 4 flagship health programme Inside Health and is a regular commentator on TV and radio on health and social issues. Max has also written four bestselling books for adults. The Marvellous Adventure of Being Human is his first book for children.

Chris Madden (Illustrator)
Chris Madden is a British illustrator; he currently lives in Manchester, UK with his wife and children. Since graduating from Stockport College with a degree in Design & Visual arts, his illustrations have appeared in many magazines and newspapers. Chris has a knack for bringing the human body to life on the page: other clients include The Lancet and Harvard Magazine.