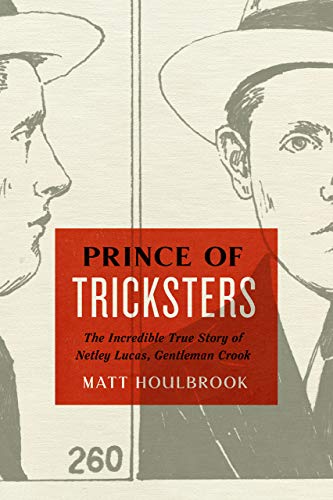 Meet Netley Lucas, Prince of Tricksters-royal biographer, best-selling crime writer, and gentleman crook. In the years after the Great War, Lucas becomes infamous for climbing the British social ladder by his expert trickery-his changing names and telling of tales. An impudent young playboy and a confessed confidence trickster, he finances his far-flung hedonism through fraud and false pretenses. After repeated spells in prison, Lucas transforms himself into a confessing ex-crook, turning his inside knowledge of the underworld into a lucrative career as freelance journalist and crime expert. But then he's found out again-exposed and disgraced for faking an exclusive about a murder case. So he reinvents himself, taking a new name and embarking on a prolific, if short-lived, career as a royal biographer and publisher. Chased around the world by detectives and journalists after yet another sensational scandal, the gentleman crook dies as spectacularly as he lived-a washed-up alcoholic, asphyxiated in a fire of his own making.

The lives of Netley Lucas are as flamboyant as they are unlikely. In Prince of Tricksters, Matt Houlbrook picks up the threads of Lucas's colorful lies and lives. Interweaving crime writing and court records, letters and life-writing, Houlbrook tells Lucas's fascinating story and, in the process, provides a panoramic view of the 1920s and '30s. In the restless times after the Great War, the gentlemanly trickster was an exemplary figure, whose tall tales and bogus biographies exposed the everyday difficulties of knowing who and what to trust. Tracing how Lucas both evoked and unsettled the world through which he moved, Houlbrook shows how he prompted a pervasive crisis of confidence that encompassed British society, culture, and politics.