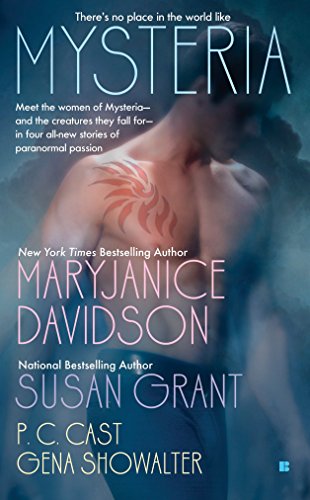 This anthology of paranormal romance introduces the ladies of Mysteria, Colorado--and the creatures they fall for--in these four stories by Davidson, Susan Grant, P.C. Cast, and Gena Showalter. Original.

Located in the picturesque mountains of Colorado, Mysteria is a place where the supernatural co-exists with the natural. It's a town of bewitching seduction, dark magic, and sensual demons...

In MaryJanice Davidson's "Alone Wolf," Charlene Houtenan is the voluptuous local realtor, who knows a hot property when she sees one. And when a new werewolf appears in town, she's going to make a move he can't resist...

In P. C. Cast's "Candy Cox and the Big Bad (Were) Wolf, Candice Cox may be Mysteria High's sexiest teacher, but after five husbands, she's burnt out on romance. Until a former student--a drool-worthy werewolf--makes her howl at the moon...

In Gena Showalter's "The Witches of Mysteria and the Dead Who Love Them, Genevieve Tawdry is a witch with a bad case of unrequited love for the owner of the local bar. But is his sudden change of heart the result of a love potion--or a literally breathtaking passion?

In Susan Grant's "Mortal in Mysteria," Harmony Faithfull is the new minister in town. She's having a crisis of faith--in herself--until she finds a buck-naked man in her garden, a former demon who unleashes the devil inside her...

"Splitting the difference between Desperate Housewives and The X-Files, this paranormal romance brings magic and monsters to the steamy suburbs in four satisfying novellas about the town of Mysteria. There's magic, heat, and lots of laughs."--Publishers Weekly

"Charming, funny, and quite offbeat, this collection highlights the vast talents of these authors. The perfect escape read!"--RT Book Reviews

"This [anthology] has all of the elements that I just love to read about. I had such fun reading this book. I really didn't want these stories to end. I loved the town of Mysteria and hope these authors see fit to visit the townspeople . . . again!"--The Best Reviews

"Desperate Housewives meets Charmed, this collection of novellas is as varied in its content as the authors who've written them. From sweet and passionate to dark and sexy, the werewolves, vampires, demons, witches, fairies, and humans of Mysteria are as engaging and fun as they are diverse and compelling."--Fresh Fiction

P. C. Cast is the #1 New York Times bestselling author of the Goddess Summoning series, the House of Night Novels, and the Tales of a New World series. She is a member of the Oklahoma Writers Hall of Fame. Her novels have been awarded the prestigious Oklahoma Book Award, YALSA Quick Pick for Reluctant Readers, Romantic Times Reviewers' Choice Award, the Prism, Holt Medallion, Daphne du Maurier, Booksellers' Best, and the Laurel Wreath. Ms. Cast lives in Oregon surrounded by beloved cats, dogs, horses, and family.

MaryJanice Davidson is the New York Times bestselling author of several books, including the Undead novels featuring Vampire Queen Betsy Taylor. With her husband, Anthony Alongi, she also writes a series featuring a teen weredragon named Jennifer Scales. MaryJanice lives in Minneapolis with her husband and two children and is currently working on her next book.

Gena Showalter is the New York Times bestselling author of more than thirty novels in a wide range of genres. Her books have appeared in Cosmopolitan and Seventeen and have been nominated for the prestigious RITA Award, as well as the National Readers' Choice Award.