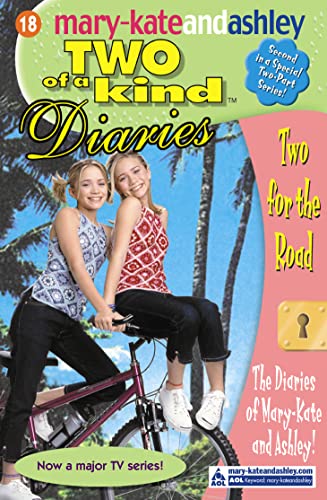 Two For The Road Mary-Kate Olsen

Two For The Road (Two Of A Kind Diaries, Book 18) Mary-Kate Olsen

Part Two of a special 2-part mini-series, TWO OF A KIND DIARIES! Written in diary format and featuring excerpts from the twins' letters and e-mails to one another.

So far this school trip to sunny Florida has been a blast. I've even been made captain of our triathalon sports team! But now Dana Woletsky has shown up and she wants to take the team away from me. She wants to take my boyfriend, Ross, away, too! How can I keep her from ruining my summer? I wish Mary-Kate could help, but she can't. She's spending all her time frantically looking for her lost diary. She says there's something in it no one should read, but she won't tell me what it is. I mean, what could be so bad?

By Nancy Butcher.
From the series created by Robert Griffard and Howard Adler.

At just 15 they are a showbiz phenomenon and so squeaky clean they make Britney Spears look like a rebel.
The Sun (January 31, 2002)

Mary-Kate and Ashley Olsen must be the coolest twins around.
tv choice (December 15-21, Issue 51)

The most powerful teenagers on earth.
Andrew Buncombe, The Independent (January 2002)