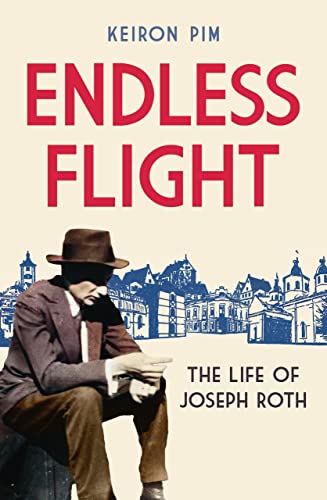 The first English language biography of the great European writer Joseph Roth, exploring his genius and his tragic life story, lived in the shadow of war.

The first English language biography of the great European writer Joseph Roth, exploring his genius and his tragic life story, lived in the shadow of war. --- The brilliant, mercurial, self-mythologising novelist and journalist Joseph Roth, author of the European 20th century masterpiece The Radetzky March, was an observer and chronicler of his times. Born and raised in Galicia on the eastern edge of the Austro-Hungarian Empire, his life's decline mirrored the collapse of civilised Europe: in his last peripatetic years, he was exiled from Germany, his wife driven into an asylum, and he died an alcoholic on the eve of the World War II. With keen insight, rigor and sensitivity, Keiron Pim delivers a visceral portrait of Roth's internal restlessness and search for belonging, from his childhood in the town of Brody to his Vienna years and his unsettled roaming of Europe. Exploring the role of Roth's absent father in his imaginings, and his attitude to his Jewishness, Roth's biography has particular relevance to us now, not only in the growing recognition and revival of his works, but also because his life's trajectory speaks powerfully to us in a time of uncertainty, fear, refugee crises and rising ethno-nationalism. --- A superb biography - fascinating, shrewd, insightful. Finally, Joseph Roth's extraordinary life is recounted for his multitude of English readers in compelling detail... Enthralling - William Boyd
A superb biography - fascinating, shrewd, insightful. Finally, Joseph Roth's extraordinary life is recounted for his multitude of English readers in compelling detail... Enthralling -- William Boyd
Utterly engrossing. Endless Flight is a biography of deep humanity, one that captures the individual, the place and the times with acute and affecting brilliance. I loved it -- Philippe Sands
It's incredible that it's taken this long for an English-language biography of Joseph Roth to appear-and incredibly fortunate that Keiron Pim has been the one to do it, evoking with compassion and depth the work and the world of one of the greatest of modern writers -- Benjamin Moser
A remarkable and penetrating study of Roth's life and times. Today, even more of the world finds itself in endless flight. As such, this beautiful, timely and critically important book introduces English readers to an indispensable guide both to Roth's past and to our present -- Devorah Baum
Fascinating, sophisticated, meticulous: this biography of Joseph Roth catches his cosmopolitan spirit, turbulent nature and literary genius amidst the melancholy of a darkening age -- Simon Sebag Montefiore, author of Stalin the court of the red tsar
Pim has told this vital and singular story with the deft tenacity and the passionate flexibility of attitude and tone that it requires, and his book is a mighty achievement -- Patrick Mackie
A novelist of genius, an anti-nationalist prophet in the wilderness, a human being capable of the monstrous: Endless Flight does humane and painstaking justice to all these aspects, and more, of Joseph Roth's short, utterly compelling life. Anyone who reckons The Radetzky March one of the supreme twentieth-century novels will devour Keiron Pim's biography avariciously -- David Kynaston
Kieron Pim combines admirably lucid prose with exhaustive research and a great affection for his subject... A thoughtful, absorbing and assured account of a great author's complex, rootless and ultimately tragic life... [Endless Flight is] an indispensable guide to [Roth's] life and work, and essential reading for admirers and newcomers. -- David Collard
Keiron Pim is the author of critically acclaimed Jumpin' Jack Flash: David Litvinoff and the Rock'n'Roll Underworld which was longlisted for the Gordon Burn Prize and shortlisted in the Wales Book of the Year Awards' category for Creative Non-Fiction. He has written articles for the Guardian, the Daily Telegraph and the Spectator. Alongside his writing, Pim works as a proofreader, an editor and a mentor to aspiring non-fiction authors. He lives in Norwich with his wife and three daughters.
GOR012555405
9781783785094
1783785098
Endless Flight: The Life of Joseph Roth Keiron Pim
Keiron Pim
Gebraucht - Sehr Gut
Gebundene Ausgabe
Granta Books
2022-10-06
544
N/A
Die Abbildung des Buches dient nur Illustrationszwecken, die tatsächliche Bindung, das Cover und die Auflage können sich davon unterscheiden.
Dies ist ein gebrauchtes Buch. Es wurde schon einmal gelesen und weist von der früheren Nutzung Gebrauchsspuren auf. Wir gehen davon aus, dass es im Großen und Ganzen in einem sehr guten Zustand ist. Sollten Sie jedoch nicht vollständig zufrieden sein, setzen Sie sich bitte mit uns in Verbindung.