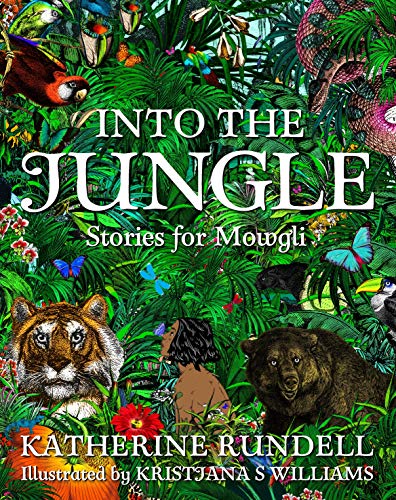 Into the Jungle Katherine Rundell

Into the Jungle Katherine Rundell

Into the Jungle is a modern classic in the making, as Katherine Rundell creates charming and compelling origin stories for all Kipling's best-known characters, from Baloo and Shere Khan to Kaa and Bagheera. As Mowgli travels through the Indian jungle, this brilliantly visual tale, which weaves each short story together into a wider whole, will make readers both laugh and cry.

A gorgeously produced gift hardback with foiled cover, a ribbon marker and colour illustrations throughout by creative genius Kristjana S Williams, this is truly a book for all the family to treasure and share.

Rudyard Kipling's The Jungle Book, first published by Macmillan in 1894, is one of the most enduring books of children's literature, delighting generations of children. Katherine Rundell has taken this as the basis of her new and enchanting tale, sharing the early years of favourite characters and informing the creatures they become in Kipling's classic, with stories about family and friendship, loyalty and jungle law, and a final battle which will decide the future of the forest.

These are unforgettable tales of friendship, bravery and jungle lore, and Rundell's writing is an intoxicating mix of precision and wildness... and the lush drama and colour of [Williams'] work makes this an exceptional gift book. -- Fiona Noble * Bookseller, Editor's Pick *
Following her Amazon-inspired Costa win Rundell transports us to the Indian jungle for a collection of origin stories for Kipling's best-loved Jungle Book characters, told with charm, with and personality. For children of seven plus, with lush, wild illustrations by Williams. -- Fiona Noble * Bookseller Children's Buyer Guide, Highlights of the Season *
These beginnings resonate with echoes of Kipling's original and Just So Stories. They are written with mischievous scatological jokes, lively action and characteristic precision and surprise, because, as Baloo says, language "matters more than anything else". The stories savour the profusion of the rainforest, as do Williams's spectacularly lavish collages of engravings of animals and plants. * Sunday Times, children's book of the week *
Far from defanging their source, Rundell's stories - interweaving Mother Wolf's belligerent past, Bagheera's early tragedy, and Baloo's gift for communication - only enrich its wildness, complemented by Kristjana Williams's lush full-colour illustrations. * Guardian *
The magnificent Rundell, [...] takes on Rudyard Kipling with these inventive back stories for everyone from Shere Khan to Baloo. * Independent *
An oversize, richly illustrated, heirloom-quality book of origin stories... [Rundell's] lyrical words feel as though they were written to be read aloud in front of a fire... it's impossible not to imagine a room full of younger kids transfixed by the hypnotic action. Williams' richly drawn jungle scapes are equal parts gorgeous and haunting, an irresistible combination. * The New York Times *
Rundell may have created a new classic collection of tales. * Daily Post Wales, Liverpool Echo, Morley Observer and Advertiser, Birmingham Mail, Grimsby Telegraph, children's Book of the week *
Witty, charming and steeped in the harsh truth of nature, this is an absolute must for all Jungle Book fans, young or old. * Daily Mail *
Created a new set of tales for a new generation * Yorkshire Post *
An exciting addition to Kipling's The Jungle Book, with delightful new stories about Mowgli and his friends. It would work wonderfully for reading aloud on Boxing Day. * Good Housekeeping *
You'll be transported deep into the Indian jungle for adventures with favourites characters like Baloo and Shere Khan * WRD Magazine *
Kids will love the colour illustrations - and they'll squiggle and squirm, as Roald Dahl said they would. * SAGA magazine *
This engaging tapestry of tales is enhanced by stylish illustrations, rich with colour and detail, which beautifully bring the jungle and its inhabitants to life. * Booktrust *
Rundell may well have created a new classic * Sunday Post *

Katherine Rundell spent her childhood in Africa and Europe and is now a Fellow of All Souls College, Oxford, where she works on Renaissance literature. She is the bestselling author of The Girl Savage, Rooftoppers, The Wolf Wilder and The Explorer. She won the Waterstones Children's Book Prize and the Blue Peter Book Award in 2014, and the Costa Children's Book Award in 2018. Her writing - mostly on books, but also on climbing, on art and on wolves - has appeared in the London Review of Books, The New York Times, the Telegraph and Intelligent Life.

Kristjana S Williams is an Icelandic artist who studied graphic design and illustration at Central St Martins. She has worked as a Creative Director, but now creates fine art pieces, art prints, furniture and more with her own studio. Her work is renowned throughout the industry and she has won numerous awards including a D&AD award, Clio Award and a first prize at New York Festivals Grand Prix. She has previously illustrated The Wonder Garden for Wide Eyed Editions.