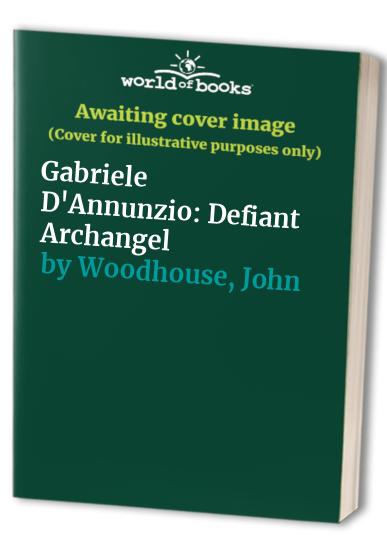 This title charts the incredible work and life of Gabriele D'Annunzio, considered pivotal in the emergence of great 20th-century Italian literature. It is intended for students and scholars of Italian literature, history, and politics, and European Decadentism.

Gabriele D'Annunzio, 'Gabriel of the Annunciation', shocked and dazzled early twentieth-century Europe with his sexual exploits, military feats, and political escapades. In a blaze of self-publicity those activities provided material for his fiery journalism and the stunning literary creations which have influenced each succeeding generation of Italian writers. French translations of his scandalous novels first exposed Europe to his genius, but his roots lay deep in his native soil. A pivotal presence in the evolution of Italian literature, politics, society, and taste, he rarely allowed his name to fall from the public gaze during forty critical years, and more than any other Italian since the unification of his country, he casts a shadow forwards to the present day. D'Annunzio's sexual promiscuity was legendary, yet he was a somewhat unconventional Casanova: something under five foot six, prematurely balding, blinded in one eye during the war, and blessed with what his secretary-factotum called unfortunate teeth, he was the caricaturist's dream. At the age of sixteen he pawned his grandfather's watch for the money to visit a brothel. And though he was married for 55 years to Maris, Duchess of Gallese, his adult years witnessed a trail of discarded lovers, who were severally driven to drugs, suicide attempts, alcoholism, and madness. His countless liaisons involved a number of women cast as muses in his writings, including artistes such as Eleonora Duse, Ida Rubinstein, and Isadora Duncan. From his earliest years D'Annunzio set out to create a unique personality for himself, aided by friends who invented myths about his life and early writings. In adolescence he circulated rumours of his own death to the Italian newspapers, helping to stir up interest in the imminent publication of his latest work. That slim volume, mentioned in most of the ensuing obituaries, sold well and found sympathetic reviewers. As time passed, other stories accumulated and attached themselves to his public persona, until truth and fiction became indistinguishable. Had he been born during a storm at sea on the deck of the sailing-ship Irene? Was he involved in the celebrated theft of the Mona Lisa in 1911? Had he experimented with cannibalism during a journey through Libya? Was he, in the end, assassinated by a Nazi spy for his opposition in 1937 to the alliance between Mussolini and Hitler? The present biography is the first fully-documented appraisal of this extraordinary man's career, making use of previously unpublished manuscripts and new source material, and attempting to maintain a degree of objectivity never previously seen in Dannunzian scholarship.
In this admirably level-headed biography he does full justice to the poet's genius and to the Nietzschean celebrity-hero's significant role in European cultural and political history. His elegantly written book is scrupulous enough to satisfy his fellow-scholars, but it is also racy enough to provide plenty of thrills for the lay reader. * Lucy Hughes-Hallet, The Sunday Times *
This sober biography of an improbable figure is scholarly, respectful and balanced, rescuing him from vilification as a proto-fascist and resisting any temptation to camp him up * Culture, The Sunday Times *
List of Illustrations ; 1. Early Life and Experience ; 2. The Conquest of Rome ; 3. Life into Art ; 4. Naples and Beyond ; 5. The Poet as Playwright: On Stage with Eleonora Duse ; 6. The Poet as Politician ; 7. The Tuscan Idyll ; 8. From Dalliance to Exile ; 9. D'Annunzio in France ; 10. Return from Exile: Intervention and War ; 11. The Invasion of Fiume ; 12. The Vittoriale: Theatre of Memory ; Bibliography ; Index
GOR002855450
9780198187639
0198187637
Gabriele D'Annunzio: Defiant Archangel John Woodhouse (Fiat-Serena Professor of Italian Studies at the University of Oxford and Fellow, Fiat-Serena Professor of Italian Studies at the University of Oxford and Fellow, Magdalen College, Oxford)
John Woodhouse (Fiat-Serena Professor of Italian Studies at the University of Oxford and Fellow, Fiat-Serena Professor of Italian Studies at the University of Oxford and Fellow, Magdalen College, Oxford)
Gebraucht - Sehr Gut
Broschiert
Oxford University Press
20010412
430
N/A
Die Abbildung des Buches dient nur Illustrationszwecken, die tatsächliche Bindung, das Cover und die Auflage können sich davon unterscheiden.
Dies ist ein gebrauchtes Buch. Es wurde schon einmal gelesen und weist von der früheren Nutzung Gebrauchsspuren auf. Wir gehen davon aus, dass es im Großen und Ganzen in einem sehr guten Zustand ist. Sollten Sie jedoch nicht vollständig zufrieden sein, setzen Sie sich bitte mit uns in Verbindung.