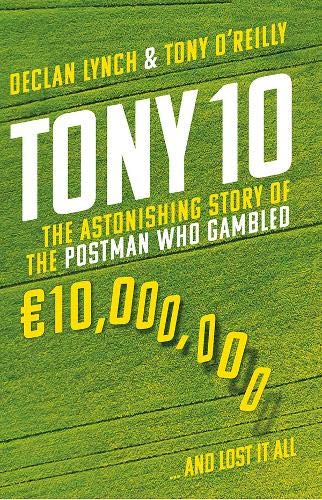 A heart-stopping ride with a dangerous compulsion beyond control, Tony 10 is the story of the postman who stole EURO1.75 million from the local post office, where he was a branch manager, to fund a gambling addiction that began with a bet of EURO1 and ended with the loss of more than EURO10 million, his family, his home - and won him a prison sentence.

Tony 10 was the online betting username of Tony O'Reilly, the postman who became front-page news in 2011 after he stole EURO1.75 million from An Post while he was a branch manager in Gorey. He used the money to fund a gambling addiction that began with a bet of EURO1 and eventually rose to EURO10 million, leading to the loss of his job, his family, his home - and winning him a prison sentence.

From the heart-stopping moments in a hotel room in Cyprus with his wedding money riding on the Epsom Derby, to the euphoria of winning half a million over a weekend, to the late goals and the horses falling at the last fence, Tony 10 is the story of an ordinary man's journey from normality to catastrophe. At times, he vowed to get out while he was ahead, only to be taken by another surge of adrenaline, falling deeper and deeper into a compulsion that consumed his life. His disappearance on the morning the fraud was discovered led to a surreal three days on the run in Northern Ireland, and ultimately his arrest, conviction and sentencing to four years in jail.

Tony 10 is a mesmerising story of the secret life of a pathological gambler - as well as the most compelling account yet of the damage wrought by the online gambling industry.

'As hair-raising as the downfall reads, O'Reilly's story grips to the end as a context of humanity replaces the sweat-browed hijinks.' Hilary A White, The Sunday Independent

'This is a spine-tingling tale, beautifully told, and at the end of the rollercoaster ride there's even a happy ending.' Damian Corless, The Irish Independent

'A brilliant, nerve-shredding account of one man's gambling addiction - and every word of it true. Would highly recommend it.' Paul Howard

`A fascinating and often incredible read' - Barry Glendenning The Guardian