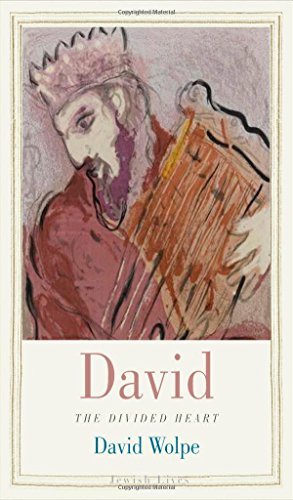 A reexamination of the biblical David, legendary warrior, poet, and king, by one of America's most respected rabbis

From the prizewinning Jewish Lives series, a reexamination of the biblical David, legendary warrior, poet, and king, by one of America's most respected rabbis

An excellent study of the most fascinating character in the Old Testament.-Wall Street Journal

A portrait of David that is vibrant and nuanced, full of the complications that marked his life.-Jewish Week

Of all the figures in the Bible, David arguably stands out as the most perplexing and enigmatic. He was many things: a warrior who subdued Goliath and the Philistines; a king who united a nation; a poet who created beautiful, sensitive verse; a loyal servant of God who proposed the great Temple and founded the Messianic line; a schemer, deceiver, and adulterer who freely indulged his very human appetites.

David Wolpe, whom Newsweek called the most influential rabbi in America, takes a fresh look at biblical David in an attempt to find coherence in his seemingly contradictory actions and impulses. The author questions why David holds such an exalted place in history and legend, and then proceeds to unravel his complex character based on information found in the book of Samuel and later literature. What emerges is a fascinating portrait of an exceptional human being who, despite his many flaws, was truly beloved by God.

Jewish Lives is a prizewinning series of interpretative biography designed to explore the many facets of Jewish identity. Individual volumes illuminate the imprint of Jewish figures upon literature, religion, philosophy, politics, cultural and economic life, and the arts and sciences. Subjects are paired with authors to elicit lively, deeply informed books that explore the range and depth of the Jewish experience from antiquity to the present.

In 2014, the Jewish Book Council named Jewish Lives the winner of its Jewish Book of the Year Award, the first series ever to receive this award.

Superb -The Guardian
This is an excellent study of the most fascinating character in the Old Testament.-Wall Street Journal

How can a man who murders his lover's husband in order to cover up an adulterous affair be fit to be king? . . . Wolpe gently and gracefully explores the many facets-king, sinner, father, lover, and husband, among others-that together create David's outsized personality . . . In the end, the author observes, contemporary readers identify with David so well because he is full of contradictions, and he is great because of this complexity, not in spite of it.-Publishers Weekly

Finalist for the 2014 National Jewish Book Awards sponsored by the Jewish Book Council in the Biography, Autobiography and Memoir category

A sensitive and utterly unsparing reading of the most attractive and least edifying character in the Hebrew Bible.-Jack Miles