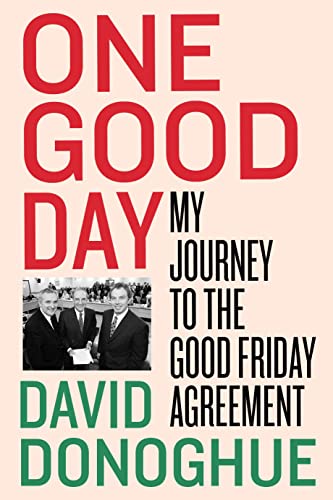 George Mitchell described his time helping broker peace in Northern Ireland by saying, 'We had 700 bad days - and then one good day, which changed the course of history'.

This is the fascinating insider account of those negotiations from the then Irish head of the Anglo-Irish Secretariat in Belfast, exploring the complex and delicate series of talks

One Good Day: My Journey to the Good Friday Agreement David Donoghue

When George Mitchell described his time helping broker peace in Northern Ireland, he said, 'We had 700 bad days - and then one good day, which changed the course of history.'

One Good Day is the fascinating insider account of those negotiations from diplomat David Donoghue, who was then Irish head of the Anglo-Irish Secretariat in Belfast. It explores the complex, delicate and often frustrating series of talks that drew the Troubles to an end.

April 2023 marks the 25-year anniversary of the Good Friday Agreement, hailed internationally as a near-miracle of collective collaboration, compromise and diplomacy. One Good Day offers an absorbing perspective on the drama of the negotiations from someone who was right at the centre of the action, alongside all the key players such as Martin McGuinness, Gerry Adams, John Hume, Bill Clinton, Bertie Ahern and Mo Mowlam.

'Incisive and compelling - an insider's story of the negotiations which delivered the Good Friday Agreement.' George Mitchell

'A gripping account of how we achieved the agreement that changed Ireland for the better.' Bertie Ahern

David Donoghue was one of the Irish government's negotiators for the Good Friday Agreement. He served as Irish Ambassador in Russia, Germany and Austria before being appointed Permanent Representative of Ireland to the UN in New York. He retired from the Irish foreign service in 2017, but remains active in these issues.