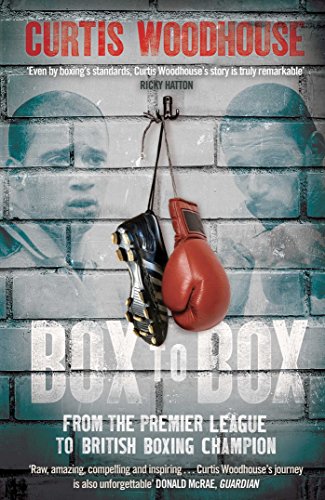 Box to Box: From the Premier League to British Boxing Champion Curtis Woodhouse

'Even by boxing's standards, Curtis Woodhouse's story is truly remarkable' Ricky Hatton
'As brutally honest as it is gripping, amusing and illuminating' Donald McRae
'A pulsating page-turner of a book' Mail on Sunday

The football world is filled with stories of talented young footballers who have thrown it all away before drifting into obscurity. Similarly, the tale of an ageing boxer who won the title against the odds is so familiar it has become a cliche. But put the two stories together and you've got something special: wasted footballers simply don't become boxing champions - at least they didn't before Curtis Woodhouse.

Woodhouse had been destined for greatness. At the age of 17 he made his debut for his local club, Sheffield United, and quickly went from earning GBP42 a week to GBP4000 a week. Suddenly he felt like a rock star, and began living like one - which didn't help his football. Initially, there wasn't a problem, and he earned four England Under-21 caps, playing alongside the likes of Steven Gerrard and Frank Lampard. As his drinking increased and he began getting involved in fights, he was sold to Birmingham City at 20 and saw his wages double - but so did his problems. After a brawl, he was sentenced to 250 hours' community service, and when he finally reached the Premier League he ended up playing against Liverpool while still drunk. He'd fallen out of love with the game. After another transfer, manager Barry Fry suggested he take up boxing to provide an outlet for his anger, and a new passion was born.

While still playing football, he became determined to make it as a boxer, and endured a long, hard battle to develop the skills to give him a chance, and in September 2006 he made his professional debut. With his father on his deathbed, Woodhouse made a promise: he would win a British title. On 22 February 2014, he got his chance against Darren Hamilton - 'I knew I wouldn't lose.' Packed with brilliant stories and searingly honest insight, Box to Box shows how anyone can achieve their dreams - if they work hard enough.

'This tale...will have you teary one moment and in fits of laughter the next. A must read' Daily Star
'Even by boxing's standards, Curtis Woodhouse's story is truly remarkable' -- Ricky Hatton
'A pulsating page-turner of a book' -- Joe Bernstein * Mail on Sunday *
'Incredible story. So few brutally honest books like this around. Inspirational stuff.' -- Adrian Durham
Curtis Woodhouse is one of the most compelling and funniest sportsmen I have ever met. He brings the contrasting worlds of professional football and boxing to life - in a way that is as brutally honest as it is gripping, amusing and illuminating. Woodhouse, in the company of his skilled co-writer Ben Dirs, has produced a riveting read. If you're interested in football, boxing or, most of all, real life, Box to Box will draw you in and keep you hooked. -- Donald McRae * Author of the award-winning Dark Trade and In Black & White *
'This tale...will have you teary one moment and in fits of laughter the next. A must read for those who love football and boxing, or both.' -- Chris McKenna * Daily Star *
'This car-crash tale ... is littered with anecdotes and insights that bring the dressing rooms of football and boxing to life, while leaving you saluting the withering wit and streetwise sagacity of a man who found the courage to chase his dream when others believed he was already living it... Whether you are in the mood to laugh or to cry, read this and do both... The mood changes from chapter to chapter, reflecting the compelling, conflicting character of the man himself. And as you turn the last page, you hanker after sharing a pint with him, knowing it could get messy...' -- Mike Costello
'Great lad, great book' -- Robbie Savage
'An astonishing story and a fantastic read' -- Darren Fletcher * BBC Radio 5 Live *
'Highly recommended' -- Boxing News
'A crazy journey and a great read' -- Gareth A. Davies * Daily Telegraph *
'Brutally honest...One of the most explicit sporting books you will ever read' -- Alan Biggs * Sheffield Star *
'An explosive tale of one of the most remarkable careers ever seen in British sport. Woodhouse's life story is Hollywood material.' -- Hull Daily Mail
'An uncompromising account' * Metro *
'A brilliant book' * Boxing News *
Curtis Woodhouse was born in Yorkshire in 1980, and made his debut for his local club at 17, going on to make almost 300 senior appearances for Sheffield United, Birmingham City, Rotherham United, Peterborough United, Hull City and Grimsby Town. In 2006, he had his first professional boxing bout, eventually going on to win the British light-welterweight title in 2014. He lives in Yorkshire with his wife and three children, and is the manager of Bridlington Town.
GOR007784310
9781471147722
147114772X
Box to Box: From the Premier League to British Boxing Champion Curtis Woodhouse
Curtis Woodhouse
Gebraucht - Sehr Gut
Gebundene Ausgabe
Simon & Schuster Ltd
20161006
288
N/A
Die Abbildung des Buches dient nur Illustrationszwecken, die tatsächliche Bindung, das Cover und die Auflage können sich davon unterscheiden.
Dies ist ein gebrauchtes Buch. Es wurde schon einmal gelesen und weist von der früheren Nutzung Gebrauchsspuren auf. Wir gehen davon aus, dass es im Großen und Ganzen in einem sehr guten Zustand ist. Sollten Sie jedoch nicht vollständig zufrieden sein, setzen Sie sich bitte mit uns in Verbindung.