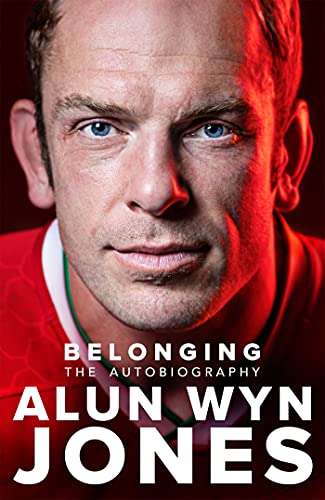 The brilliant and combative autobiography from the most capped rugby player in history, Alun Wyn Jones.

'A true warrior. He demands excellence from himself and others around him. He has had success and disappointment, joy and sadness. People think they know him but unless you read this book you will never know the REAL Alun Wyn Jones.' - Warren Gatland

Match Day. Closing a hotel room door, down into the team room. Up into a hotel lobby full of supporters in red shirts, of cheers and applause and shouts of good luck.

This is where the story of Alun Wyn Jones's journey begins, the story that every child who has dreamt of playing rugby for their country starts with. From the tightness in your stomach to the look on your team-mates' faces, the adrenaline starting to flow within.

Belonging is the story about how the boy left Mumbles and returned as the most capped rugby player of all time. It is the story of what it takes to become a player who is seen by many as one of the greatest Welsh players there has ever been. What it takes to go from sitting, crossed legged on the hall floor at school, watching the 1997 Lions Tour of South Africa to being named the 2021 Lions Captain.

But is it also about perthyn - belonging, playing for Wales, working your way through the age-grades and the club matches and regional sides. What it takes to earn the right to be there, and what it feels like to make the sacrifices along the way. Feeling the bond to the great players not long gone, and feeling the ties to the millions in front rooms and pubs across the hillsides and the valleys, coast to coast. Knowing that deep down you just want to belong, be a part of it, as everyone does.

From the rain swept pitches of Swansea to making his test debut against Argentina in Patagonia in 2006, from touring with the Lions in 2009, 2013, 2017 and 2021 to losing a parent and building a family, Belonging is the autobiography of one of the most compelling figures in World rugby. Told with unflinching honesty, this is the ultimate story of what it takes and what it means to play for your country: what it means to belong.

To me, the most impressive thing about AWJ is his longevity. It takes so much dedication and commitment to make it to the top, and his sustained success is super impressive and inspiring! Along with his constant drive to get the best from himself and the guys around him. -- Geraint Thomas
A true warrior. He demands excellence from himself and others around him. He has had success and disappointment, joy and sadness. People think they know him but unless you read this book you will never know the REAL Alun Wyn Jones. -- Warren Gatland
A once in a generation player & leader and of the all time great Wales and Lions players. -- Sam Warburton
'A brilliant rugby player, an incredible leader, fierce competitor and great person. Combined they give you one of the greatest players of all time. He is a leader in everything he does. In how he plays, how he competes, how he represents where he comes from and in how he treats people. It was an honour it was to play with and against him.' -- Paul O'Connell

Unbelievable player. Magnificent captain. One of the game's greatest icons.

Alun Wyn Jones is the most capped rugby union player of all time. He is the current captain of the Wales national team, and captained the Ospreys for eight years. He is one of only a small group of Welsh players to have won three Grand Slams, including Gerald Davies, Gareth Edwards, JPR Williams, Ryan Jones, Adam Jones and Gethin Jenkins and two Six Nations championships. He was named as the best player of the 2019 Six Nations Championship and in 2021 was named as captain for the Lions tour of South Africa. Belonging is his autobiography.

Tom Fordyce is an award-winning broadcaster and writer. He was the BBC's Chief Sports Writer for 10 years, covering the biggest sporting events in the world, including multiple Six Nations and Rugby World Cups. He has collaborated on bestsellers for Peter Crouch, Geraint Thomas and Jamie Redknapp, among others.