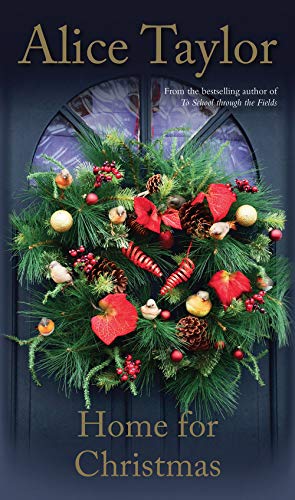 With all the warmth of a winter fire, Alice takes us through the exciting preparation for Christmas from getting the perfect tree to baking those very crucial puddings and pies.

Alice also give us a intimate insight into her Christmas Eve and Christmas day rituals and talks us through her favourite Christmas recipes. She tells how the Christmas foods were made when she was a child, using the bastable and the range, and how she prepares them now.

Alice loves Christmas and her huge enjoyment of the season fills this book with pleasure and delight.

a must for those of you who like to put their feet up in front of the fire and read about the joys of Christmas ... a pure joy

a treasure trove of precious Christmas memories guaranteed to warm the soul of readers this festive season ... Alice's book is a journey worth taking ... charmingly seasonal

part memoir, part festive compendium ... her silky prose which so captivated readers in her previous memoirs such as To School Through the Fields and Do You Remember?, is the perfect craft to lend itself to such a warm and evocative time ... Taylor's joy of everything that surrounds the festivities permeates each page, with a whole chapter dedicated to even the most incidental of tasks, such as collecting the moss in woods near her home to create her traditional crib and manger

the cover ... is as romantic as you could find in its depiction of a Christmas wreath on a front door, and it's a fair indication of the contents ... these reminiscences of rural Cork Christmases will be just the fare her devoted readers crave ... beautifully produced and illustrated

a beautifully produced new book about the festive season

* Belfast Telegraph *
Alice Taylor lives in the village of Innishannon in County Cork, in a house attached to the local supermarket and post office. Since her eldest son has taken over responsibility for the shop, she has been able to devote more time to her writing. Alice Taylor worked as a telephonist in Killarney and Bandon. When she married, she moved to Innishannon where she ran a guesthouse at first, then the supermarket and post office. She and her husband, Gabriel Murphy, who sadly passed away in 2005, had four sons and one daughter. In 1984 she edited and published the first issue of Candlelight, a local magazine which has since appeared annually. In 1986 she published an illustrated collection of her own verse. To School Through the Fields was published in May 1988. It was an immediate success, and quickly became the biggest selling book ever published in Ireland. It launched Alice on a series of signing sessions, talks and readings the length and breadth of Ireland. Her first radio interview, forty two minutes long on RTE Radio's Gay Byrne Show, was the most talked about radio programme of 1988, and her first television interview, of the same length, was the highlight of the year on RTE television's Late Late Show. Since then she has appeared on radio programmes such as Woman's Hour, Midweek and The Gloria Hunniford Show, and she has been the subject of major profiles in the Observer and the Mail on Sunday. Alice has written nearly twenty books since then, large exploring her village of Inishannon, and the way of life in rural Ireland. She has also written poetry and fiction: her first novel, The Woman of the House, was an immediate bestseller in Ireland, topping the paperback fiction lists for many weeks. One of Ireland's most popular authors, her most recent book is And Life Lights Up. Emma Byrne is a graphic designer and artist. She is a graduate of Central Saint Martins School of Art and Design. She has won numerous awards for her design including The IDI (Irish Design Institute) Graduate Designer of the Year, the IDI Promotional Literature Award for her work on Brown Morning, and a Children's Books Ireland Bisto Merit Award for her work on Something Beginning With P: New Poems from Irish Poets. She has illustrated many books, including Best-Loved Oscar Wilde, Best Loved Yeats, The Most Beautiful Letter in the World by Karl O'Neill, a special edition of Ulysses by James Joyce, and A Terrible Beauty by Mairead Ashe Fitzgerald. She lives in a thatched house in Co. Wexford.
GOR009029203
9781847179654
1847179657
Home For Christmas Alice Taylor
Alice Taylor
Gebraucht - Sehr Gut
Gebundene Ausgabe
O'Brien Press Ltd
2017-10-09
256
N/A
Die Abbildung des Buches dient nur Illustrationszwecken, die tatsächliche Bindung, das Cover und die Auflage können sich davon unterscheiden.
Dies ist ein gebrauchtes Buch. Es wurde schon einmal gelesen und weist von der früheren Nutzung Gebrauchsspuren auf. Wir gehen davon aus, dass es im Großen und Ganzen in einem sehr guten Zustand ist. Sollten Sie jedoch nicht vollständig zufrieden sein, setzen Sie sich bitte mit uns in Verbindung.