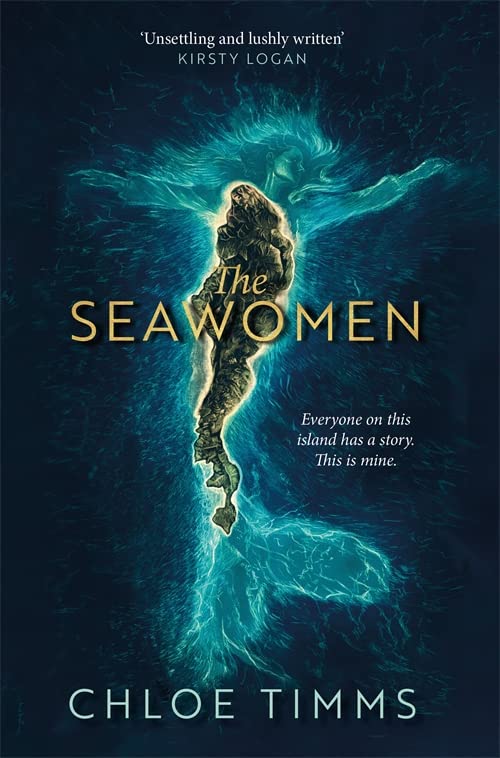 The Seawomen by Chloe Timms

The Seawomen are taught to be the evils of the deep surrounding Eden's Isle, but in time Esta finds out the real evil is in the hearts of men in this magical, debut novel by Chloe Timms.

The Seawomen by Chloe Timms

'An unsettling and lushly-written reimagining of witch trials. The Handmaid's Tale meets The Shape of Water' KIRSTY LOGAN

Everyone on this island has a story. This is mine.

Esta has known nothing but Eden's Isle her whole life. After a fire left her orphaned and badly scarred, Esta was raised by her grandmother in a deeply religious society who cut itself off from the mainland in the name of salvation. Here, fear rules: fear of damnation, fear of the outside world and fear of what lurks beneath the water - a corrupting evil the islanders call the Seawomen.

But Esta wants more than a life where touching the water risks corruption, where her every move is watched and women are controlled in every aspect of their lives. Married off, the women of the island must conceive a child within their appointed motheryear or be marked as cursed and cast into the sea as a sacrifice in an act called the Untethering.

When Esta witnesses a woman Untethered she sees a future to fear. Her fate awaits, a loveless marriage, her motheryear declared. And after a brief taste of freedom, the insular world Esta knows begins to unravel...

The Seawomen is a fiercely written and timely feminist novel, at once gothic, fantastical and truly unforgettable.

'The Seawomen immerses you in its watery world' SOPHIE WARD

'Dive in and don't look back' ZOE GILBERT

'I was hooked' NATASHA BROWN

'Mesmerising and moving, I couldn't put it down' SUSANNAH WISE

'Beautifully written, unsettling as a storm over the ocean' LOUISE MORRISH

'A provocative, imaginative and beautifully written work of art' BECCA DAY
An unsettling and lushly-written reimagining of witch trials, exploring fertility, control and how what we believe can save us - or destroy us. The Handmaid's Tale meets The Shape of Water. * Kirsty Logan, author of The Gloaming *
A gripping tale of love and bravery; The Seawomen immerses you in its watery world. -- Sophie Ward, author of Booker longlisted Love and Thought Experiments
This book sucked me under and held me in its gorgeous, terrifying embrace. It's a rare treat to read a story so gripping told in such beautiful prose. Dive in and don't look back. -- Zoe Gilbert, author of Folk
A tale as slippery as a fish... I was never quite sure of what things were. Feminist allegory, modern folklore, or romance? Maybe The Seawomen is all of those things, and more. In any case, I was hooked.
Richly atmospheric, powerful and provocative. A raw and beautiful coming of age story. * Caroline Lea, author of The Glass Woman *
Fiercely feminist and utterly unique. Timms is a bold new talent. This is a story about oppression, the bonds that tie us - and the lies that break us. Suspenseful and intensely engaging, from Timms' lyrical writing to the genre-bending, unpredictable plot, you won't be able to put this one down. * Natasha Ngan, bestselling author of the Girls of Paper and Fire series *
Hold your breath and hang on to hope. Perfect for fans of The Gloaming by Kirsty Logan and The Mercies by Kiran Millwood Hargrave, The Seawomen is a captivating and sometimes terrifying debut that will sweep you out to sea. * Jen Campbell, author of The Beginning of the World in the Middle of the Night *
I read this beautiful novel in a fever dream, its sweeping prose carrying me away like a boat out at sea. Chloe Timms has written an extraordinary tale of one woman's desire for freedom, for love. Mesmerising and moving, I couldn't put it down. I have no doubt it will feature on everyone's lists * Susannah Wise, author of This Fragile Earth *
Beautifully written, unsettling as a storm over the ocean, Timms' novel reads like the darkest fable, pulling you in like the tide. * Louise Morrish, author of Operation Moonlight *
An astonishing literary achievement, The Seawomen punches you in the gut, pulls you under the water and keeps you gasping for air until the very end. This is not just a story about love and survival but also about women's empowerment and the idea that no one's life is worth more than another. Chloe Timms is an extraordinary new talent. * Laura Price, author of Single Bald Female *
An allegorical love story with echoes of fairytales and told with a visceral brutality. At its heart it is about whether to believe what we are told over what we feel to be true * Kate Sawyer, author of Costa shortlisted The Stranding *
It isn't often that a novel grips me, unsettles me and totally blows me away with its unpredictability, but Timms manages it. A provocative, imaginative and beautifully written work of art * Becca Day, author of The Girl Beyond the Gate *
The Seawomen is an evocative, atmospheric read. I was drawn into the insular community of Eden's Isle, heavy with secrets and lies. The final chapters in particular were incredibly compelling - I didn't come up for air until I'd finished the whole thing -- Louise Carey, author of Inscape
Such a compelling read, filled with myth & desire & the sea -- Katie Hale, author of My Name is Monster
The Seawomen is simply astonishing - a salt-smattered, genre-bending masterpiece written in the most exquisite, evocative prose. This is perfect for fans of Midsommar, The Handmaid's Tale and The Shape of Water. Dizzyingly, intoxicatingly beautiful -- Lizzie Pook, author of Moonlight and the Pearler's Daughter
The Seawomen literally took my breath away. Masterfully crafted and exquisite writing. This novel is what I call a masterpiece -- Lizzie Damilola Blackburn, author of Yinka, Where Is Your Huzband?
A powerful, enchanting novel, with prose so vivid you can taste the salt in the air on your tongue -- Anna Bailey, author of Tall Bones
Chloe Timms is creating quite a stir in the literary world with her debut novel The Seawomen ... a hugely atmospheric book of power and control with the brilliant character of Esta at its centre. For fans of The Handmaid's Tale and The Power. * The Style Life *
With splashes of The Handmaid's Tale and the isolated, quasi-religious communities in the films Midsommar and The Village, this is a book you can truly submerge yourself in; so take a deep breath and dive beneath the waves' * Cambridge Edition *
Chloe Timms is a writer from the Kent coast. After a career in teaching, Chloe studied for an MA in Creative Writing at the University of Kent and won a scholarship for the Faber Academy where she completed their six-month novel writing course. Chloe is passionate about disability rights, having been diagnosed with the condition Spinal Muscular Atrophy at 18 months old, and has campaigned on a number of crucial issues. The Seawomen is her first novel.
NGR9781529369564
9781529369564
1529369568
The Seawomen by Chloe Timms
Chloe Timms
New
Hardback
Hodder & Stoughton General Division
2022-06-14
320
N/A
Book picture is for illustrative purposes only, actual binding, cover or edition may vary.
This is a new book - be the first to read this copy. With untouched pages and a perfect binding, your brand new copy is ready to be opened for the first time
Trustpilot