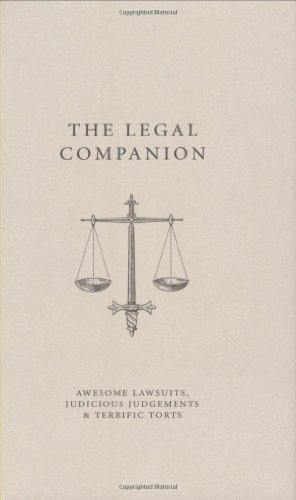 The Legal Companion by Vincent Powell

The law touches everyone and even the average, law-abiding citizen is catered for in this unique book. From Lawmakers to lawbreakers, The Legal Companion offers a view of the oddities, quirks, origins and stories behind the legal world.

The Legal Companion by Vincent Powell

The law touches everyone and even the average, law-abiding citizen is catered for in this unique book. From Lawmakers to lawbreakers, 'The Legal Companion' offers a view of the oddities, quirks, origins and stories behind the legal world. Starting, quite literally at the Beginning, (as we learn how The Ten Commandments were later revised by God on the second draft) the book ranges from the serious (how fingerprinting began) to the bizarre (why the skeleton of Jeremy Bentham votes at University College London meetings); the informative (why Judges have a notch on top of their wigs) to the completely ridiculous (why priests marked the legal boundary of their parish by hanging children upside down and banging their heads against stone markers), 'The Legal Companion' takes the reader through a legal minefield of notes, quotes, facts and stats.

But 'The Legal Companion' doesn't just contain fascinating snippets of information, it also offers extracts from the finest writing about the law over the centuries and in modern times. Charles Dickens shares a cell with J.G. Ballard, while Herman Melville and Franz Kafka stand in the dock with William Burroughs and Hunter S. Thompson. And like all the other books in the 'Companion' series, there's a magnificent piece of statistical trivia to match each page number.

The market for this book is huge: there are an enormous number of legal professionals working in the UK, over 60,000 solicitors and 10,000 barristers regulated by the Law Society in England and Wales alone. The study of law is increasingly popular with around 10,000 law graduates every year with law taught in 89 universities and 36 other institutions. And while professionals and students will be interested in the mixture of fact and fun that 'The Legal Companion' provides, there is also plenty for the layperson to understand and enjoy... the ratings for crime and legal dramas are among the highest on television and some of Hollywood's greatest films are based in the courtroom.

The book is written and compiled by Vincent Powell, a Barrister and Solicitor of the High Court of New Zealand, who has edited numerous legal publications on everything from road traffic law to companies and securities law, and from employment law to Wills Probate. He is currently editor of the IP Review, a quarterly magazine on intellectual property. Vince lives in Swiss Cottage, London.
GOR001223572
9781861058386
1861058381
The Legal Companion by Vincent Powell
Vincent Powell
The Companion Series
Used - Very Good
Hardback
Pavilion Books
2005-03-31
160
N/A
Book picture is for illustrative purposes only, actual binding, cover or edition may vary.
This is a used book - there is no escaping the fact it has been read by someone else and it will show signs of wear and previous use. Overall we expect it to be in very good condition, but if you are not entirely satisfied please get in touch with us
Trustpilot