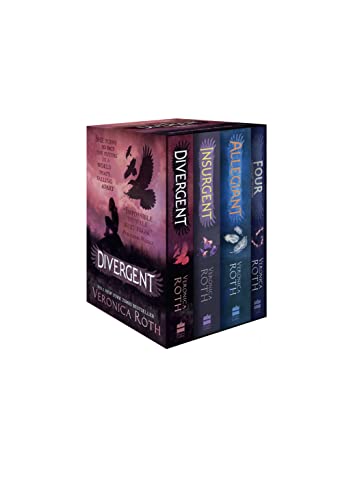 THE DIVERGENT SERIES: ALLEGIANT - a major motion picture in 2016.

THE DIVERGENT SERIES: ALLEGIANT - a major motion picture in 2016.

Divergent:
Sixteen-year-old Tris has been forced to make a terrible choice. In a divided society where everyone must conform, Tris does not fit.
So she ventures out, alone, determined to find out where she truly belongs. Tris can trust no one in this brutal new world, but she is drawn to a boy who seems to both threaten and protect her.

Insurgent:
Tris has survived a brutal attack on her home, but she has paid a terrible price. Wracked by grief and guilt, she becomes reckless as she struggles to accept her new future. If Tris wants to uncover the truth, she must be stronger than ever as more shocking choices and sacrifices lie ahead.

Allegiant:
The faction-based society that Tris once believed in is shattered - fractured by violence and power struggles and scarred by loss and betrayal. So when offered a chance to explore the world past the limits she's known, Tris is ready. Perhaps beyond the fence, she will find a simple new life, free from complicated lies, tangled loyalties and painful memories.

But Tris's new reality is even more alarming than the one she left behind. And once again, Tris must battle to comprehend the complexities of human nature - and of herself - while facing impossible choices about courage, allegiance, sacrifice and love.

"The next big thing." (Rolling Stone )

"If you like Hunger Games & Twilight, then get stoked for DIVERGENT! Trust us on this-this baby is going to blow up BIG! And if you chose to remain factionless, then you're gonna be one lonely soul." (PerezHilton.com )

"A taut and shiveringly exciting read! Tris is exactly the sort of unflinching and fierce heroine I love. I couldn't turn the pages fast enough." Melissa Marr, bestselling author of Wicked Lovely

"DIVERGENT is a captivating, fascinating book that kept me in constant suspense and was never short on surprises. It will be a long time before I quit thinking about this haunting vision of the future." James Dashner, author of 'The Maze Runner'

"Well-written and brilliantly executed, DIVERGENT is a heart-pounding debut that cannot be missed. Tris stands out in her action-packed, thrilling, and emotionally honest journey to determine who she wants to be in a society that demands she conform. It's dystopian fiction at its best!" Kiersten White, New York Times bestselling author of PARANORMALCY

"A memorable, unpredictable journey from which it is nearly impossible to turn away" - Publishers Weekly

"Divergent holds its own in the [dystopian] genre, with brisk pacing, lavish flights of imagination and writing that occasionally startles with fine detail." - New York Times

" A masterpiece of epic proportions and an outstanding debut novel." - Narratively Speaking Blog

"Be prepared to sit on the edge of your seats as this heart-pounding thriller hypnotises you until the very last page." - Fantasticbookreviews.com

Veronica Roth graduated from Northwestern University with a degree in creative writing. While she was a student, she often chose to work on the story that would become 'Divergent' instead of doing her homework. It was indeed a transforming choice.
Now a full-time writer, Ms Roth lives near Chicago. 'Divergent' is her first novel.

GOR007426247
9780008175504
0008175500
Divergent Series Box Set (Books 1-4) by Veronica Roth
Veronica Roth
Used - Like New
Hardback
HarperCollins Publishers
2016-02-25
1616
N/A
Book picture is for illustrative purposes only, actual binding, cover or edition may vary.
The book has been read, but looks new. The book cover has no visible wear, and the dust jacket is included if applicable. No missing or damaged pages, no tears, possible very minimal creasing, no underlining or highlighting of text, and no writing in the margins
Trustpilot