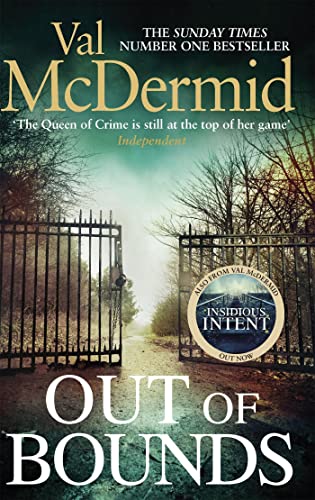 Out of Bounds by Val McDermid

Number one bestseller Val McDermid is back with her most gripping, chilling and suspenseful novel yet.

Out of Bounds: A Karen Pirie Thriller by Val McDermid

'There are lots of things that ran in families, but murder wasn't one of them . . .'

When a teenage joyrider crashes a stolen car and ends up in a coma, a routine DNA test could be the key to unlocking the mystery of a twenty-year-old murder inquiry. Detective Chief Inspector Karen Pirie is an expert at solving the unsolvable. With each cold case closed, justice is served. So, finding the answer should be straightforward, but it's as twisted as the DNA helix itself.

Meanwhile Karen finds herself irresistibly drawn to another case, one that she has no business investigating. And as she pieces together decades-old evidence, Karen discovers the most dangerous kinds of secrets. Secrets that someone is willing to kill for . . .

'The real mistress of psychological gripping thrillers; no one can plot or tell a story like she can' Daily Express

The fourth thrilling novel in the DCI Karen Pirie series

An incredibly suspenseful thriller, elegantly plotted with smartly drawn characters and fascinating detail * Sunday Mirror *
What superlatives are there left to describe the phenomenon that is the multi award-winning McDermid? . . . Told with McDermid's legendary verve and eye for detail, it grabs the reader by the throat and never lets go * Daily Mail *
It is evident in her 30th novel that her mastery of the crime has matured well * Sunday Express *
[An] engaging new novel . . . McDermid's 30th novel offers fascinating insights into the ethical dilemmas thrown up by advances in forensic science * Sunday Times *
Her books combine ironclad storytelling technique, cogent commentaries on modern society and an attitude to the crime genre's long history that is both interrogative and innovative . . . we are reminded that the new Queen of Crime is still at the top of her game * Independent *
McDermid's expertly juggled plotlines and masterful handling of pace and tension tick all the best boxes, but what makes this book a real cracker is Pirie herself - grieving, insubordinate and dogged in her pursuit of the various culprits * Guardian *
Quite simply, nobody does British crime writing better . . . [a] twisty, deliciously tangled thriller * Peterborough Telegraph *
As intelligent and chillingly good as ever * Good Housekeeping *
Packed with intrigue, warmly drawn characters and dollops of tension, McDermid's 30th novel leaves the reader looking forward to the 31st * Irish Independent *
On her 30th novel . . . none is more deserving of the queen-of-crime mantle than Val McDermid . . . I would like to see a great deal more of DCI Pirie * Irish Times *
McDermid proves herself to be as adept as ever at mixing thrilling crime fiction with psychological study . . . Karen is a compelling character, and her personal baggage lends Out of Bounds a great backstory . . . she writes with a brisk light touch, but the book does not stint on realistic detail. Out of Bounds is a fine, tense, and multi-layered addition to the canon of the queen of Scottish crime fiction * Irish Sunday Business Post *
It's a treat to watch DCI Pirie once again as she pursues a tantalising forensic trail through a brilliantly realised Scottish setting . . . the back-and-forths with her pusillanimous boss, as she deflates his attempts to undermine her, are a particular joy * Scotland on Sunday *
McDermid concocts complex plots with plenty of twists and red herrings. At times the tension is palpable and there are genuine surprises . . . McDermid is a dab hand at creating enough plausibility to make her contributions to the genre intensely readable * Sunday Herald *
A celebrated crime author with an attention to detail which makes her stories both gripping and totally authentic * Western Daily Press *
Her thrillers never fail to entertain, and this - her 30th (!) novel - is no exception. Another twisted treat * Heat *
Val McDermid is a number one bestseller whose novels have been translated into more than thirty languages, and have sold over sixteen million copies. She has won many awards internationally, including the CWA Gold Dagger for best crime novel of the year and the LA Times Book of the Year Award. She was inducted into the ITV3 Crime Thriller Awards Hall of Fame in 2009, was the recipient of the CWA Cartier Diamond Dagger in 2010 and received the Lambda Literary Foundation Pioneer Award in 2011. In 2016, Val received the Outstanding Contribution to Crime Fiction Award at the Theakstons Old Peculier Crime Writing Festival and in 2017 received the DIVA Literary Prize for Crime, and was elected a Fellow of both the Royal Society of Literature and the Royal Society of Edinburgh. Val has served as a judge for the Women's Prize for Fiction and the Man Booker Prize, and was Chair of the Wellcome Book Prize in 2017. She is the recipient of six honorary doctorates and is an Honorary Fellow of St Hilda's College, Oxford. She writes full-time and divides her time between Edinburgh and East Neuk of Fife.
GOR008062191
9780751561432
0751561436
Out of Bounds: A Karen Pirie Thriller by Val McDermid
Val McDermid
Used - Very Good
Paperback
Little, Brown Book Group
2017-01-26
496
Short-listed for McIlvanney Prize for Scottish Crime 2017 (UK) Long-listed for Theakstons Old Peculier Crime Novel of the Year 2017 (UK)
Book picture is for illustrative purposes only, actual binding, cover or edition may vary.
This is a used book - there is no escaping the fact it has been read by someone else and it will show signs of wear and previous use. Overall we expect it to be in very good condition, but if you are not entirely satisfied please get in touch with us
Trustpilot