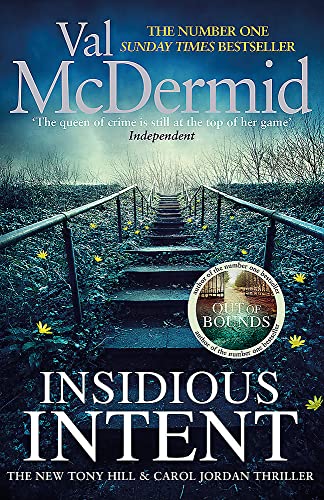 Number one bestseller Val McDermid returns with a pulse-pounding, suspenseful novel featuring two of the most distinctive and iconic characters in crime fiction: Tony Hill and Carol Jordan.

'One of the most surprising twists you'll read this year. Outstanding' Irish Independent

'Engrossing . . . a colossal reminder of just why McDermid has been the queen of crime for three decades' Heat

Discover the pulse-pounding novel from the inimitable queen of crime and number one bestseller, Val McDermid, featuring two of the most iconic and unforgettable characters in crime fiction: Tony Hill and Carol Jordan
___________________

[T]horoughly pleasing, engaging, indeed compelling, a very fine piece of craftsmanship. It will reward those who have followed the Jordan and Hill sequence, and send latecomers back to the earlier novels. * Scotsman *
Val McDermid, known as the queen of psychological thrillers, surpasses herself here, delivering one of the most surprising twists you'll read this year. Outstanding. * Irish Independent *
The tenth outing for the much-loved duo is a reliably engrossing thriller - and one that ends with a colossal reminder of just why McDermid has been the queen of crime for three decades. * Heat *
Elegantly plotted, it's pure class * Sunday Mirror *
Dark and expert crime writing . . . beautifully crafted * The Arts Desk *
McDermid ratchets up the tension . . . [her] most expressive and emotional novel to date, giving readers more than just a clever criminal to get their teeth into. * The National *
There aren't many to touch her for insight into the minds of hunter and hunted. -- Susan Hill
Here is another gripping crime novel by Val McDermid . . . an exciting book by one of today's most accomplished crime writers * Literary Review *
Val McDermid is a number one bestseller whose novels have been translated into more than thirty languages, and have sold over sixteen million copies. She has won many awards internationally, including the CWA Gold Dagger for best crime novel of the year and the LA Times Book of the Year Award. She was inducted into the ITV3 Crime Thriller Awards Hall of Fame in 2009, was the recipient of the CWA Cartier Diamond Dagger in 2010 and received the Lambda Literary Foundation Pioneer Award in 2011. In 2016, Val received the Outstanding Contribution to Crime Fiction Award at the Theakstons Old Peculier Crime Writing Festival and in 2017 received the DIVA Literary Prize for Crime, and was elected a Fellow of both the Royal Society of Literature and the Royal Society of Edinburgh. Val has served as a judge for the Women's Prize for Fiction and the Man Booker Prize, and was Chair of the Wellcome Book Prize in 2017. She is the recipient of six honorary doctorates and is an Honorary Fellow of St Hilda's College, Oxford. She writes full-time and divides her time between Edinburgh and East Neuk of Fife.
GOR008858933
9780751568240
0751568244
Insidious Intent: (Tony Hill and Carol Jordan, Book 10) by Val McDermid
Val McDermid
Used - Very Good
Paperback
Little, Brown Book Group
2018-02-22
528
Winner of DIVA Literary Awards - Best Novel 2017 (UK)
Book picture is for illustrative purposes only, actual binding, cover or edition may vary.
This is a used book - there is no escaping the fact it has been read by someone else and it will show signs of wear and previous use. Overall we expect it to be in very good condition, but if you are not entirely satisfied please get in touch with us
Trustpilot