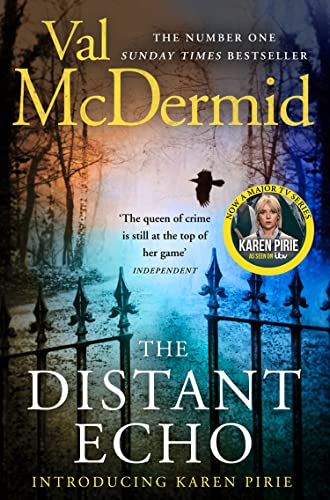 The first novel in the bestselling Karen Pirie series

The first novel in the bestselling Karen Pirie series

On a freezing Fife morning four drunken students stumble upon the body of a woman in the snow. Rosie has been raped, stabbed and left to die in an ancient Pictish cemetery. And the only suspects are the four young men now stained with her blood.

Twenty-five years later the police mount a 'cold case' review of Rosie's unsolved murder and the four are still suspects. But when two of them die in suspicious circumstances, it seems that someone is pursuing their own brand of justice. For the remaining two there is only one way to avoid becoming the next victim - find out who really killed Rosie all those years ago...

Praise for The Distant Echo:

'A classic ... McDermid pulls out all the stops. Impeccable' Guardian

'A few more sly, old-fashioned whodunits like this and she'll join the sturdy ranks of the queens of crime, on course to become Dame Val or Baroness McDermid' Sunday Times

'She has created some of the most appealing figures in current crime fiction. Val McDermid has used the crime genre to write a novel that, above everything else, celebrates life and loyalty' TLS

'A real page-turner and another McDermid triumph' Observer

'A powerful story of murder and revenge ... an exciting page-turner' Sunday Telegraph

'The queen of crime' Independent

'Val McDermid is undoubtedly the queen of British crime' Observer

'Her writing is never less than excellent' Crime Time

GOR009201394
9780008279547
0008279543
The Distant Echo (Detective Karen Pirie, Book 1) by Val McDermid
Val McDermid
Detective Karen Pirie
Used - Very Good
Paperback
HarperCollins Publishers
20180614
576
N/A
Book picture is for illustrative purposes only, actual binding, cover or edition may vary.
This is a used book - there is no escaping the fact it has been read by someone else and it will show signs of wear and previous use. Overall we expect it to be in very good condition, but if you are not entirely satisfied please get in touch with us
Trustpilot