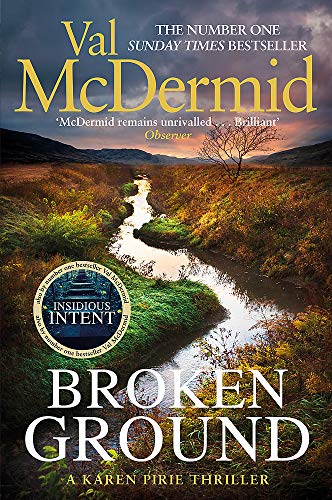 Number one bestseller and queen of crime Val McDermid returns with her most breathtakingly atmospheric and exhilarating novel yet.

'Another stellar read from McDermid, and further evidence that her "Queen of Crime" status will not be challenged' Scotsman

When a body is discovered in the remote depths of the Highlands, DCI Karen Pirie finds herself in the right place at the right time. Unearthed with someone's long-buried inheritance, the victim seems to belong to the distant past - until new evidence suggests otherwise, and Karen is called in to unravel a case where nothing is as it seems.

It's not long before an overheard conversation draws Karen into the heart of a different case, however - a shocking crime she thought she'd already prevented. As she inches closer to the twisted truths at the centre of these murders, it becomes clear that she's dealing with a version of justice terrifyingly different to her own . . .

There is nothing more gratifying than watching a master craftswoman at work, and she is on fine form here * Observer *
Another stellar read from McDermid, and further evidence that her "Queen of Crime" status will not be challenged * Scotsman *
The masterly handling of the pace and plot, blended with brilliant characterisation, show why best-selling writer Val McDermid retains her title of new Queen of Crime * People *
McDermid's deceptively languid style, sly black humour and metronomic sense of pacing delivers a compulsively readable tale * Irish Times *
Her trademark combination of macabre suspense and a light touch keep you reading gratefully * Sunday Express *
Val McDermid is a number one bestseller whose novels have been translated into more than thirty languages, and have sold over sixteen million copies. She has won many awards internationally, including the CWA Gold Dagger for best crime novel of the year and the LA Times Book of the Year Award. She was inducted into the ITV3 Crime Thriller Awards Hall of Fame in 2009, was the recipient of the CWA Cartier Diamond Dagger in 2010 and received the Lambda Literary Foundation Pioneer Award in 2011. In 2016, Val received the Outstanding Contribution to Crime Fiction Award at the Theakstons Old Peculier Crime Writing Festival and in 2017 received the DIVA Literary Prize for Crime, and was elected a Fellow of both the Royal Society of Literature and the Royal Society of Edinburgh. Val has served as a judge for the Women's Prize for Fiction and the Man Booker Prize, and was Chair of the Wellcome Book Prize in 2017. She is the recipient of six honorary doctorates and is an Honorary Fellow of St Hilda's College, Oxford. She writes full-time and divides her time between Edinburgh and East Neuk of Fife.
GOR009257217
9781408709351
140870935X
Broken Ground by Val McDermid
Val McDermid
Karen Pirie
Used - Very Good
Hardback
Little, Brown Book Group
2018-08-23
432
Long-listed for Highland Book Prize 2019 (UK)
Book picture is for illustrative purposes only, actual binding, cover or edition may vary.
This is a used book - there is no escaping the fact it has been read by someone else and it will show signs of wear and previous use. Overall we expect it to be in very good condition, but if you are not entirely satisfied please get in touch with us
Trustpilot