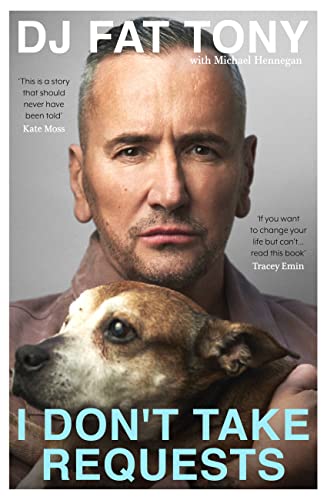 I Don't Take Requests: 'If you want to change your life...read this book.' TRACEY EMIN by Tony Marnoch

The outrageously candid memoir from club culture's most beloved and notorious DJ.
'I love this man so much. He was, and always will be, my knight in shining Westwood.' DAVINA MCCALL

'If you want to change your life but can't.. I strongly advise you read this book' TRACEY EMIN

As one of club culture's most notorious - and best loved - figures, Tony is a complete force of nature.
Here he tells the most extraordinary stories of depravity and hedonism, of week-long benders and extreme self-destruction - and of recovery, redemption, friendship and the joy of a good tune.

'Anyone can get a party started, but no one keeps it going like Fat Tony, the energy never dips and
what a life he's lived.. He's a tosser but we still love him.' ELTON JOHN & DAVID FURNISH

DJ Fat Tony has been described as 'the closest thing that club culture has to a national treasure' and the 'unlikely cult hero of quarantine'. Few people have crammed so many lives into one: when your first line of cocaine is aged 16 with Freddie Mercury, where do you go from there?

I Don't Take Requests is Fat Tony's breathtakingly candid and outrageous memoir of a life of extremes. From his childhood on an estate in Battersea where he honed his petty criminality, was abused by an older man and made friends with Boy George, to his teenage years spent parading the Kings Road in his latest (stolen) clobber, working as a receptionist for a prostitute, hanging out with Leigh Bowery and Sue Tilley and creating his drag persona, to his life as DJ to the stars and his spiral into serious drug addiction.

Now, he is 16 years sober and, alongside working to help others overcome addiction, DJing for everyone from Elton John to Louis Vuitton and the Beckhams - and running one of lockdown's most popular Instagram accounts with its wickedly funny memes.

It is all here in horrifying, glorious, heart-breaking detail.

'Whenever we host a party, Tony is our first port of call. He'll have everyone dancing, guarantee great memories, and the stories he tells... Just don't f*****g ask for any requests!' DAVID & VICTORIA BECKHAM

'There is nobody in London, let alone the world who has lived a more extraordinary life... his journey from villain to real life hero is one of the most beautiful examples of humanity I have ever witnessed. I wouldn't be without this c*nt.' KELLY OSBOURNE

'Hearing Tony's story is brutal and shocking. He is nothing short of a miracle and his willingness to be of service to others seeking sobriety is testament to how far he has come from the days of pulling his own teeth out.' MARC JACOBS

Fat Tony - real name Tony Marnoch - is the 16-years sober DJ who first found fame on the London social scene in the 1980s as a DJ, best mate of Boy George, and any other name you might want to mention from the time. He has played for everyone from Prince to Madonna, and club-hopped his way through the '90s with friends such as George Michael, Neneh Cherry and Kate Moss. A messy drug affair led to a spell in rehab, and he has since enjoyed a renaissance in life, becoming one of fashion's favourite acts as Vogue's resident DJ, and Donatella Versace and Victoria Beckham's go-to party guy. He does this whilst being a leading voice on the sobriety scene, an LGBTQ activist and has recently found a new legion of fans through his social media account of irreverent memes, becoming an unlikely hero of lockdown. Michael Hennegan is a writer and journalist who was previously an editor at Vogue Russia and The Sunday Times Style for over a decade, and who now contributes to titles such as British GQ, Style, ES Magazine, Vogue, 10 Magazine, GQ Style, Harrods Magazine and Soho House Magazine.
NGR9781529389449
9781529389449
1529389445
I Don't Take Requests: 'If you want to change your life...read this book.' TRACEY EMIN by Tony Marnoch
Tony Marnoch
New
Hardback
Hodder & Stoughton
2022-05-26
272
N/A
Book picture is for illustrative purposes only, actual binding, cover or edition may vary.
This is a new book - be the first to read this copy. With untouched pages and a perfect binding, your brand new copy is ready to be opened for the first time
Trustpilot