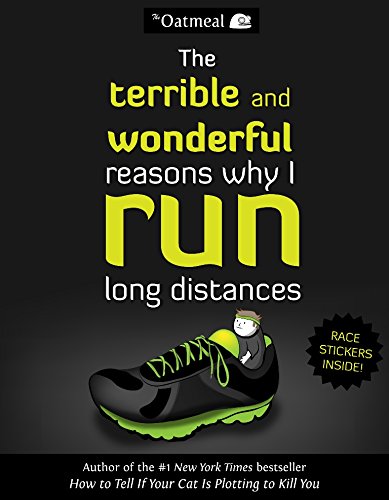 It's a book about gluttony, vanity, bliss, electrical storms, ranch dressing, and Godzilla. It's a book about all the terrible and wonderful reasons we wake up each day and propel our bodies through rain, shine, heaven, and hell.

From #1 New York Times best-selling author, Matthew Inman, AKA The Oatmeal, comes this hilarious, beautiful, poignant collection of comics and stories about running, eating, and one cartoonist's reasons for jogging across mountains until his toenails fall off.

Containing over 70 pages of never-before-seen material, including "A Lazy Cartoonist's Guide to Becoming a Runner" and "The Blerch's Guide to Dieting," this book also comes with Blerch race stickers.
"A short, laugh-out-loud graphic book about the promises and perils of exercise.The hilarious and the profound are often only inches apart, and Inman (Why Grizzly Bears Should Wear Underpants, 2013, etc.) consistently nails the space between them. Sure to delight Inman's fans and probably win him some new ones."