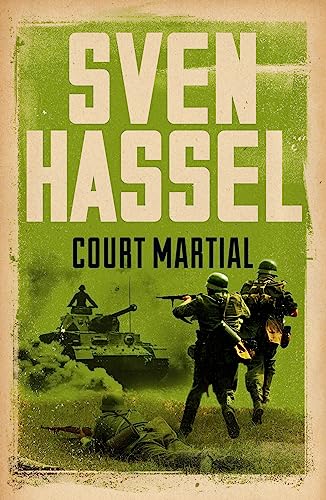 COURT MARTIAL is Sven Hassel's darkest novel and a shocking insight into the cruelty the Nazi regime inflicted on its own people. Now relaunched with a stunning new look.

'They beat me,' whispers the artillery officer, 'Smashed my teeth in, sent an electric current through me. They want me to confess to something I never did.'

Sven Hassel and his comrades are fighting on the Finnish front, facing an arctic winter more ferocious than anything they've ever known.

But if they survive, they face shipment to Torgau Prison - the centre of Hitler's penal system - where deserters, convicts and anyone showing anti-Nazi sentiments are imprisoned and punished.

This could mean arrest, court-martial and execution. Or it could mean torture and starvation.

COURT MARTIAL is Sven Hassel's darkest novel and a shocking insight into the cruelty the Nazi regime inflicted on its own people.

In essence this is an expose of the absurdity of war, and a moving plea for peace. As such, it takes its rank with far milder books, such as ALL QUIET ON THE WESTERN FRONT - NEWSDAYHassel's books of war are the most powerful I have ever readThe story shudders from page to page while the devoted friends live precariously from year to year, until only the one survivor is left to write this book. And a gripping book it is - CHICAGO SUNDAY TRIBUNE

Born in 1917 in Fredensborg, Denmark, Sven Hassel joined the merchant navy at the age of 14. He did his compulsory year's military service in the Danish forces in 1936 and then, facing unemployment, joined the German army. He served throughout the Second World War on all fronts except North Africa. When the war ended in 1945 he was transferred between Russian, American and French prison camps, and upon returning to Denmark, was sentenced to 10 years in prison for treason. He began writing LEGION OF THE DAMNED during his time as a prisoner of war. His 14 Second World War books, which draw on his own encounters and experiences as a soldier, have sold over 53 million copies worldwide and have been published in more than 50 countries. He peacefully passed away in Barcelona in 2012, where he had resided since 1964.