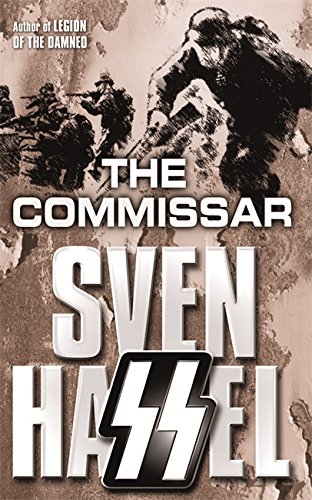 The Commissar by Sven Hassel

THE COMMISSAR is a shocking insight into the brutalities faced by ordinary soldiers and the atrocities committed in the name of survival.

The Commissar by Sven Hassel

A shocking insight into the brutalities faced by ordinary soldiers and the atrocities committed in the name of survival.

Dispassionately we stared at the bloody scene. It had become an everyday sight.

The 27th Penal Regiment care nothing for Hitler's war. They fight only to stay alive.

But then they uncover the Soviet Army's biggest secret. A Russian commissar has hidden thirty million dollars of gold somewhere behind enemy lines.

In a madcap scheme, Porta brokers a deal with the commissar: free passage for the Russians in return for a share of the gold.

To find it, Sven and his comrades must be prepared to lie, steal and go behind the lines of the deadly Russian army...

Born in 1917 in Fredensborg, Denmark, Sven Hassel joined the merchant navy at the age of 14. He did his compulsory year's military service in the Danish forces in 1936 and then, facing unemployment, joined the German army. He served throughout World War II on all fronts except North Africa. When the war ended in 1945 he was transferred between Russian, American and French prison camps, and upon returning to Denmark, was sentenced to 10 years in prison for treason. He began writing LEGION OF THE DAMNED during his time as a prisoner of war. His fourteen World War II books, which draw on his own encounters and experiences as a soldier, have sold over 53 million copies worldwide and have been published in more than 50 countries. He peacefully passed away in Barcelona in 2012, where he had resided since 1964.

GOR003008235
9780753822555
0753822555
The Commissar by Sven Hassel
Sven Hassel
Used - Well Read
Paperback
Orion Publishing Co
2008-03-06
368
N/A
Book picture is for illustrative purposes only, actual binding, cover or edition may vary.
This is a used book. We do our best to provide good quality books for you to read, but there is no escaping the fact that it has been owned and read by someone else previously. Therefore it will show signs of wear and may be an ex library book
Trustpilot