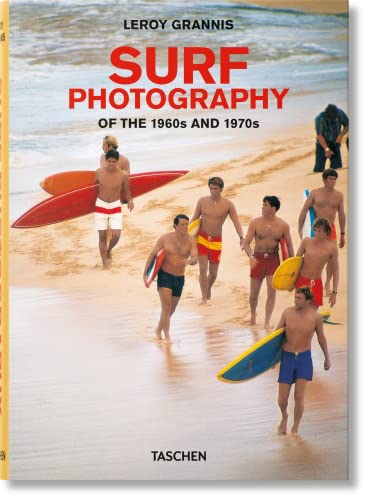 LeRoy Grannis. Surf Photography of the 1960s and 1970s by Steve Barilotti

A fresh re-edition of LeRoy Grannis's sold-out Collector's Edition, this collection gathers his most vibrant surf photography-from the perfect wave at San Onofre to dramatic wipeouts at Oahu's famed North Shore. One of the key image-makers in surfing history, Grannis also covers the emerging surf lifestyle, from surfer stomps and hordes of...

LeRoy Grannis. Surf Photography of the 1960s and 1970s by Steve Barilotti

At a time when surfing is more popular than ever, it's fitting to look back at the years that brought the sport into the mainstream. Developed by Hawaiian Islanders over five centuries ago, surfing began to peak on the mainland in the 1950s-becoming not just a sport, but a way of life, admired and exported across the globe. One of the key image-makers from that period is LeRoy Grannis, a surfer since 1931, who began photographing the longboard era of the early 1960s in both California and Hawaii.

This edition brings back Grannis's hair-raising, sold-out Collector's Edition, curated from the photographer's personal archives, to showcase his most vibrant work in a compact and affordable format-from the bliss of catching the perfect wave at San Onofre to dramatic wipeouts at Oahu's famed North Shore.

An innovator in the field, Grannis suction-cupped a waterproof box to his board, enabling him to change film in the water and stay closer to the action than any other photographer of the time. He also covered the emerging surf lifestyle, from surfer stomps and hordes of fans at surf contests to board-laden woody station wagons along the Pacific Coast Highway. It is in these iconic images that a sport still in its adolescence embodied the free-spirited nature of an era-a time before shortboards and celebrity endorsements, when surfing was at its bronzed best.

Grannis's pictures are startling. The scenes they record and breaks they document are pristinely beautiful and impossibly vacant. * The New York Times *
Over the past decade working as Surfer magazine's globe-roaming editor at large, photojournalist Steve Barilotti has made it his business to document the sport, art, and lore of surfing. He has also written for The Perfect Day and books by renowned surf photographers Art Brewer and Ted Grambeau. Jim Heimann is the Executive Editor for TASCHEN America. A cultural anthropologist, historian, and an avid collector, he has authored numerous titles on architecture, pop culture, and the history of Los Angeles and Hollywood, including TASCHEN's Surfing, Los Angeles. Portrait of a City, California Crazy, and the All-American Ads series. LeRoy Grannis's initial foray into surfing began at age 14, but it wasn't until the age of 42 that he picked up a camera and made a career out of it. Under doctor's orders to take up a hobby, Grannis built a darkroom in his garage and began shooting surfers at Hermosa Beach, and Photo: Grannis quickly became a hallmark of the California surf scene of the 1960s. Grannis is considered one of the most important documentarians of the sport, and was inducted into the Surfing Hall of Fame in 1966. He died on February 3, 2011.
NGR9783836566797
9783836566797
3836566796
LeRoy Grannis. Surf Photography of the 1960s and 1970s by Steve Barilotti
Steve Barilotti
New
Hardback
Taschen GmbH
2022-10-19
400
N/A
Book picture is for illustrative purposes only, actual binding, cover or edition may vary.
This is a new book - be the first to read this copy. With untouched pages and a perfect binding, your brand new copy is ready to be opened for the first time
Trustpilot