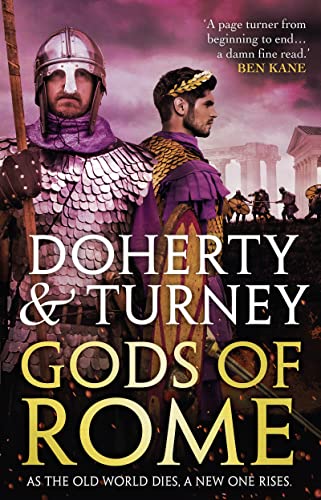 Gods of Rome by Simon Turney

The story of Constantine and Maxentius, two ambitious young men, two brilliant generals, two friends destined to fight to the death as they strive to become Emperor of Rome. The final instalment of the trilogy.

Gods of Rome by Simon Turney

For one to rule, the other must die.

AD 312: A year of horrific and brutal warfare.

Although outnumbered, Constantine's legions seem unstoppable as they surge through Maxentius' Italian heartlands. Constantine is determined to reach and seize the ancient capital of Rome from his rival, yet his army is exhausted, plagued by religious rivalries and on the verge of revolt. Maxentius meanwhile contends with a restive and dissenting Roman populace. Neither general can risk a prolonged war.

When the two forces clash amidst portents and omens in a battle that will shape history, there are factors at work beyond their control. Only one thing is certain: Constantine and Maxentius' rivalry must end. With one on a bloodied sword and the other the sole ruler of an Empire...

'A page turner from beginning to end ... A damn fine read' Ben Kane, author of Lionheart

'The Rise of Emperors series is first-rate Roman fiction. Doherty and Turney each breathe life into their respective characters with insight and humanity' Matthew Harffy, author of Wolf of Wessex

'A meticulously researched and vivid reimagining of an almost forgotten civilisation' Douglas Jackson, author of Hero of Rome (on Doherty's Empires of Bronze)

'A page turner from beginning to end ... A damn fine read' -- Ben Kane
'The Rise of Emperors series is first-rate Roman fiction' -- Matthew Harffy
PRAISE FOR SIMON TURNEY & GORDON DOHERTY:
'A nuanced portrait of an intriguing emperor' The Times (on Turney's Commodus).
'Astonishing ... A fascinating, detailed and dramatic story of one of Rome's most notorious emperors' Sunday Express (on Turney's Commodus).
'A meticulously researched and vivid reimagining of an almost forgotten civilisation' -- Douglas Jackson (on Doherty's Empires of Bronze)
Simon Turney is from Yorkshire and, having spent much of his childhood visiting historic sites, he fell in love with the Roman heritage of the region. His fascination with the ancient world snowballed from there with great interest in Rome, Egypt, Greece and Byzantium. His works include the Marius' Mules and Praetorian series, as well as the Tales of the Empire series and The Damned Emperor series. www.simonturney.com @SJATurney Gordon Doherty is a Scottish author, addicted to reading and writing historical fiction. Inspired by visits to the misty Roman ruins of Britain and the sun-baked antiquities of Turkey and Greece, Gordon has written tales of the later Roman Empire, Byzantium, Classical Greece and the Bronze Age. His works include the Legionary, Strategos and Empires of Bronze series, and the Assassin's Creed tie-in novel Odyssey. www.gordondoherty.co.uk @GordonDoherty
NGR9781800242067
9781800242067
1800242069
Gods of Rome by Simon Turney
Simon Turney
New
Hardback
Head of Zeus
2021-11-11
464
N/A
Book picture is for illustrative purposes only, actual binding, cover or edition may vary.
This is a new book - be the first to read this copy. With untouched pages and a perfect binding, your brand new copy is ready to be opened for the first time
Trustpilot