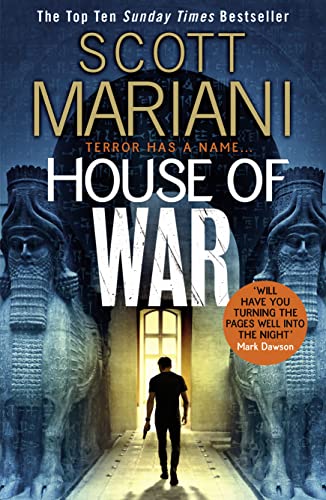 House of War by Scott Mariani

The brand-new thriller from the #1 bestseller. 'A gripping tale that will have you turning the pages well into the night' MARK DAWSON

The brand-new thriller from the #1 bestseller. 'A gripping tale that will have you turning the pages well into the night' MARK DAWSON

A DEADLY TERROR PLOT. A RACE AGAINST THE CLOCK. WILL EVIL PREVAIL?

Following a chance encounter with a terrified young woman in the streets of Paris, former SAS soldier Ben Hope finds himself hurled into a violent new mission involving murder, international terrorism and stolen historic artifacts. A mission made even more perilous by the reappearance of an old enemy from Ben's military past. A man he knew and fought years ago. A man he thought was dead.

Teaming up with the enigmatic ex-Delta Force warrior Tyler Roth, Ben travels from the seedy underworld of Paris to the islands of the Caribbean in his quest to piece together the puzzle.

As the death toll quickly mounts, he unmasks a vicious terror plot that could bring about the slaughter of millions of innocent people. Mass destruction seems just a hair's breadth away ... and only Ben Hope can prevent the unthinkable.

'Thrilling. Scott Mariani is at the top of his game' ANDY MCDERMOTT

'A high level of realism ... the action scenes come thick and fast. Like the father of the modern thriller, Frederick Forsyth, Mariani has a knack for embedding his plots in the fears and preoccupations of their time' SHOTS MAGAZINE

'House of War has it all - history, action, devious scheming and eye-opening detail. Mariani delivers a twisting storyline and raises the terrifying question: how would we survive if this really happened?' DAVID LEADBEATER

A gripping must-read for fans of the Jack Reacher and John Milton books.

Whilst the Ben Hope thrillers can be read in any order, this is the twentieth book in the series.

'Like the father of the modern thriller, Frederick Forsyth, Mariani has a knack for embedding his plots in the fears and preoccupations of their time . . . the action scenes come thick and fast, each one choreographed with painful authenticity' Shots Magazine

'Fans of Dan Brown will love this thrilling adventure' Closer

'If you've got a pulse, you'll love Scott Mariani; if you haven't, then maybe you crossed Ben Hope' Simon Toyne

'Packed with dark intrigue, danger around every corner, bullets flying, sexual tension, and an endless assault of nasty villains . . . everything a thriller should be and more' Joe Moore

Scott Mariani is the author of the worldwide-acclaimed action / adventure series featuring maverick ex-SAS hero Ben Hope. Scott's books have topped the bestseller charts in his native Britain, with The Alchemist's Secret, the first Ben Hope novel, having held the #1 Kindle position for a record-breaking six straight weeks. The Ben Hope series is translated into over twenty languages worldwide.

Scott was born in Scotland, studied in Oxford and now lives and writes in rural west Wales.

GOR010177041
9780008235987
0008235988
House of War (Ben Hope, Book 20) by Scott Mariani
Scott Mariani
Ben Hope
Used - Very Good
Paperback
HarperCollins Publishers
2019-10-31
432
N/A
Book picture is for illustrative purposes only, actual binding, cover or edition may vary.
This is a used book - there is no escaping the fact it has been read by someone else and it will show signs of wear and previous use. Overall we expect it to be in very good condition, but if you are not entirely satisfied please get in touch with us
Trustpilot