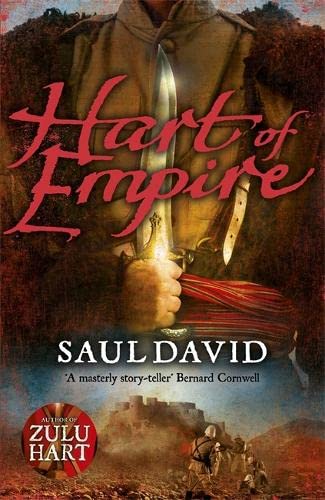 Hart of Empire by Saul David

George Hart, back in England following his heroics in the Zulu Wars, scarcely has time to gamble away his meagre fortune when he is summoned to a secret meeting in Whitehall. There, Prime Minister Disraeli himself asks George to undertake a dangerous mission to Afghanistan.

Mistrust and dislike for the local ruler chosen by the British is growing and Muslim extremists threaten to overthrow the local government. The British cannot allow the loss of Afghanistan, which would put at risk India, the jewel in the Imperial crown.

Although he suspects that the Establishment sees a part-Zulu officer as expendable, George can see that his dark skin will help him go undercover, and soon, accompanied only by a Pathan guide, he is descending the Khyber pass into a strange and violent land. On the way he meets Yasmin, an alluring Afghan princess, and together this unlikely trio find themselves in a race against time to prevent a tribal uprising and head off a catastrophic British invasion.

As precocious as ever, our daredevil hero is once again in the thick of things as he takes on anyone and everyone who dares to cross his path. Great stuff. * Daily Mail *
There is no escaping the grip of [David's] second Hart novel . . . Hart is a proper boy's own hero * Daily Telegraph *
A first-rate historian, now a masterly story-teller * Bernard Cornwell on ZULU HART *
David is a popular historian with a rare talent . . . An unashamed crowd-pleaser with a compelling, sexy hero who could give Cornwell's Sharpe a run for his money. * The Times on ZULU HART *
A Victorian adventure as big as the veldt and chewier than buffalo biltong . . . real figures of the period are endowed with motive, intent and dialogue that may be fictitious but are entirely convincing * Sunday Telegraph on ZULU HART *
Let's hope that Saul David's new character will be reappearing . . . a terrific adventure * Rodney Troubridge on ZULU HART *
Gems like this are too rare. I was hooked in ten pages. * Conn Iggulden on ZULU HART *

Saul David is Professor of War Studies at the University of Buckingham and the author of several critically-acclaimed history books, including The Indian Mutiny: 1857 (shortlisted for the Westminster Medal for Military Literature), and Zulu: The Heroism and Tragedy of the Zulu War of 1879 (a Waterstone's Military History Book of the Year).

Saul David has presented and appeared in history programmes for all the major TV channels and is a regular contributor to Radio 4. Visit Saul's website at www.sauldavid.co.uk.

GOR002097942
9780340953655
0340953659
Hart of Empire: (Zulu Hart 2) by Saul David
Saul David
Used - Very Good
Hardback
Hodder & Stoughton General Division
2010-08-05
352
N/A
Book picture is for illustrative purposes only, actual binding, cover or edition may vary.
This is a used book - there is no escaping the fact it has been read by someone else and it will show signs of wear and previous use. Overall we expect it to be in very good condition, but if you are not entirely satisfied please get in touch with us
Trustpilot