Design for Liberty Richard A. Epstein 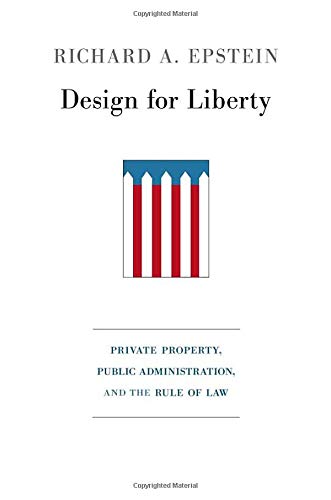 Design for Liberty by Richard A. Epstein

The noted legal scholar Richard Epstein advocates a much smaller federal government, arguing that our over-regulated state gives too much discretion to regulators, which results in arbitrary, unfair decisions and other abuses. Epstein bases his classical liberalism on the twin pillars of the rule of law and of private contracts and property rights.

Design for Liberty: Private Property, Public Administration, and the Rule of Law by Richard A. Epstein

Following a vast expansion in the twentieth century, government is beginning to creak at the joints under its enormous weight. The signs are clear: a bloated civil service, low approval ratings for Congress and the President, increasing federal-state conflict, rampant distrust of politicians and government officials, record state deficits, and major unrest among public employees.

In this compact, clearly written book, the noted legal scholar Richard Epstein advocates a much smaller federal government, arguing that our over-regulated state allows too much discretion on the part of regulators, which results in arbitrary, unfair decisions, rent-seeking, and other abuses. Epstein bases his classical liberalism on the twin pillars of the rule of law and of private contracts and property rights-an overarching structure that allows private property to keep its form regardless of changes in population, tastes, technology, and wealth. This structure also makes possible a restrained public administration to implement limited objectives. Government continues to play a key role as night-watchman, but with the added flexibility in revenues and expenditures to attend to national defense and infrastructure formation.

Although no legal system can eliminate the need for discretion in the management of both private and public affairs, predictable laws can cabin the zone of discretion and permit arbitrary decisions to be challenged. Joining a set of strong property rights with sound but limited public administration could strengthen the rule of law, with its virtues of neutrality, generality, clarity, consistency, and forward-lookingness, and reverse the contempt and cynicism that have overcome us.

This new book by the NYU law school professor and senior Hoover fellow is yet another in a long stream of magnificent defenses of the free market, in which the problem of how best to reduce and streamline public administration is brilliantly addressed. -- Walter Block * Barron's *
Design for Liberty is a masterly analysis of the problem of our modern administrative state and a highly practical manual for putting the law back on the right track...Epstein's discussion of eminent domain is so excellent, accessible, and relevant, that it should be required reading for every local and state political official... Epstein points to the 'fourth wave' of the administrative state--the Dodd-Frank financial reform bill and the Affordable Care Act (ACA)--to illustrate the bureaucracy's ongoing expansion. His analysis of the likely consequences of these laws is alone worth the price of the book. -- Joseph Postell * Claremont Review of Books *
Design for Liberty might be the most important book of 2011, possibly of this decade. It clarifies the motivation of both the tea party and Occupy Wall Street movements. Epstein has written one of those books that appear rarely and demands to be read. -- Mark Lardas * Galveston Daily News *
Epstein describes an overregulated state and argues that administrators have too much discretion--a situation that ultimately harms individuals. This short but dense book describes how the rule of law can create a more ideal system with limited, neutral public administration combined with robust private-property rights. Legal scholars and political philosophers will appreciate Epstein's well-argued case for smaller government. -- Rachel Bridgewater * Library Journal *
Richard A. Epstein is Laurence A. Tisch Professor of Law at New York University School of Law, Peter and Kirsten Bedford Senior Fellow at the Hoover Institution, and James Parker Hall Distinguished Service Professor Emeritus of Law and Senior Lecturer at the University of Chicago Law School. He is the author of, among other books, Takings: Private Property and the Power of Eminent Domain; Simple Rules for a Complex World; Design for Liberty: Private Property, Public Administration, and the Rule of Law; and The Dubious Morality of Modern Administrative Law.
GOR012309454
9780674061842
0674061845
Design for Liberty: Private Property, Public Administration, and the Rule of Law by Richard A. Epstein
Richard A. Epstein
Used - Very Good
Hardback
Harvard University Press
20111215
248
N/A
Book picture is for illustrative purposes only, actual binding, cover or edition may vary.
This is a used book - there is no escaping the fact it has been read by someone else and it will show signs of wear and previous use. Overall we expect it to be in very good condition, but if you are not entirely satisfied please get in touch with us
Trustpilot