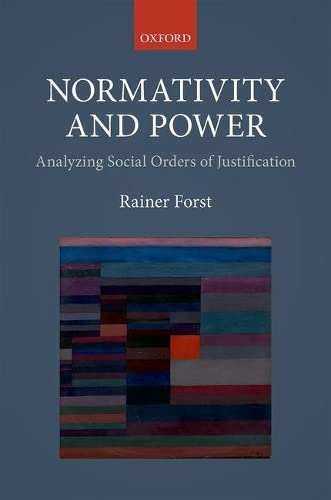 The English translation of Forst's Normativitat und Macht (2015), this book continues to develop the author's account of the nature of social orders and their justifications by re-evaluating fundamental philosophical concepts such as 'reason' and 'power'.

Humans are justificatory beingsthey offer, demand, and require justifications. The rules and institutions they follow rest on justification narratives that have evolved over time and, taken together, constitute a dynamic and tension-laden normative order. In this collection of essays, the first translation into English of the ground-breaking Normativitat und Macht (Suhrkamp 2015), Rainer Forst presents a new approach to critical theory. Each essay reflects on the basic principles that guide our normative thinking. Forst's argument goes beyond 'ideal' and 'realist' theories and shows how closely the concepts of normativity and power are interrelated, and how power rests on the capacity to influence, determine, and possibly restrict the space of justifications for others. By combining insights from the disciplines of philosophy, history, and the social sciences, Forst re-evaluates theories of justice, as well as of power, and provides the tools for a critical theory of relations of justification.
As a whole, Forst's book suggests an answer to the question of how organization scholars as social scientists can engage with normative ideas. In particular, Forst's book helps clarify two questions: first, how organizational scholars can make a distinct contribution to societal deliberation on normative ideas; and second, why research on normative ideas can only ever play a supporting role for societal deliberation on normative ideas. * Emilio Marti, Organization Studies *
Rainer Forst is the most systematic, methodologically self-conscious moral and political philosopher writing today. In this volume he manages to do something no one else could do: fruitfully connect metaethical constructivism and critical theory, through a probing exploration of the reciprocal relations between social power and normativity. * Allen Buchanan, James B. Duke Professor of Philosophy, Duke University, and Professor of the Philosophy of International Law, King's College, London *
Rainer Forst's account of the right to justification has positioned him as a central figure in political philosophy. In this new book, Forst engages with other political ideas that are often thought to compete with his vision of humans as fundamentally justificatory beings, integrating the right to justification with issues of exploitation, power, cultural narrative, and progress. Everyone interested in any of these issues will want to read this book. * Arthur Ripstein , Professor of Law and Philosophy, University of Toronto *
Rainer Forst is one of the most illuminating political philosophers now working. His writing carries forward the systematic project of the Frankfurt School with an admirable combination of analytical rigor and historical depth. At a time when liberal democracy has come to seem troublingly fragile, it is salutary to have this clear-eyed and uncompromising defense of its ideal of inclusive justification. * Michael Rosen, Department of government, Harvard University *
Rainer Forst develops a powerful version of critical theory that spans philosophy, social theory, and critique where the principle of general and reciprocal justification is fundamental. Justification is not merely a theoretical question; it is a political and practical question. Such a theory must be attentive to complex historical ways in which human beings actually justify practices as well as the way in which practices themselves are always open to criticism by an appeal to rational justification. In developing his theory, he shows how it can account for power, justice, and democracy... He is imaginative, bold, and always thought provoking. * Richard J. Bernstein, New School for Social Research *
Forst's characteristically brilliant and lucid essays demonstrate the potency of his signature idea-the right to justification-to perform a defining task of political philosophy: the critical analysis of social and political power. With stunning intellectual range, Forst tacks between abstract principle and concrete examples to make a compelling case that justice demands attentiveness to the structures through which we justify (or fail to justify) ourselves to others. This important book, by one of the leading political philosophers of our time, is essential reading for understanding justice in a global age. * Melissa Williams, Professor of Political Science, University of Toronto *
Rainer Forst is Professor of Political Theory and Philosophy at Goethe University Frankfurt and is co-director of the Cluster of Excellence 'The Formation of Normative Orders' and of the Center for Advanced Studies 'Justitia Amplificata'. In 2012 he was awarded the Gottfried Wilhelm Leibniz Prize of the German Research Foundation. Among his works that have recently appeared in translation are The Right to Justification (2012), Toleration in Conflict (2013), Justification and Critique (2014), and Justice, Democracy and the Right to Justification (a debate with critics, 2014). He is a member of the Berlin-Brandenburg Academy of Sciences and Humanities and sits on the boards of a number of international journals. Most notably he is an associate editor of Ethics and a member of the executive editorial committee of Political Theory.
INTRODUCTION: ORDERS OF JUSTIFICATION. ON THE RELATIONSHIP BETWEEN PHILOSOPHY, SOCIAL THEORY, AND CRITICISM; I REASON, NORMATIVITY, AND POWER; II JUSTIFICATION NARRATIVES AND HISTORICAL PROGRESS; III RELIGION, TOLERATION, AND LAW; IV JUSTICE, DEMOCRACY, AND LEGITIMACY; V TRANSNATIONAL JUSTICE
NPB9780198798873
9780198798873
0198798873
Normativity and Power: Analyzing Social Orders of Justification by Rainer Forst (Professor of Political Theory and Philosophy, Professor of Political Theory and Philosophy, Goethe University Frankfurt)
Rainer Forst (Professor of Political Theory and Philosophy, Professor of Political Theory and Philosophy, Goethe University Frankfurt)
New
Hardback
Oxford University Press
2017-10-19
202
N/A
Book picture is for illustrative purposes only, actual binding, cover or edition may vary.
This is a new book - be the first to read this copy. With untouched pages and a perfect binding, your brand new copy is ready to be opened for the first time
Trustpilot