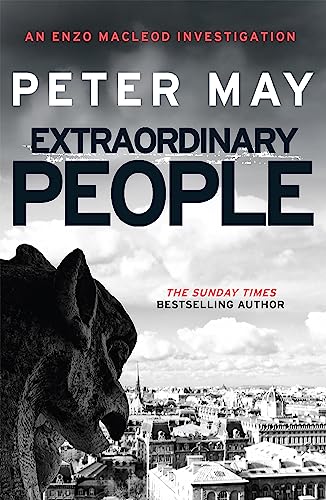 Extraordinary People by Peter May

The first book of the Enzo Files series, in which ex forensic scientist Enzo Macleod is employed to solve the ten-year-old case of a missing Frenchman.

Extraordinary People: A stunning cold-case mystery from the #1 bestseller (Enzo 1) by Peter May

**#1 BESTSELLING AUTHOR: OVER 3 MILLION COPIES SOLD**
**THE ENZO FILES: PETER MAY'S ADDICTIVE COLD-CASE SERIES**
**'Action-packed' ENTERTAINMENT WEEKLY**
**'Enzo MacLeod is one of the most unusual crime solvers I have ever met' BOOKBROWSE**

In the first book of the Enzo Files, ex forensic scientist Enzo Macleod makes a daring wager and attempts to solve the ten-year-old case of a vanished man

An old mystery.
As midnight strikes, a man desperately seeking sanctuary flees into a church. The next day, his sudden disappearance will make him famous throughout France.

A new science.
Forensic expert Enzo Macleod takes a wager to solve the seven most notorious French murders, armed with modern technology and a total disregard for the justice system.

A fresh trail.
Deep in the catacombs below the city, he unearths dark clues deliberately set - and as he draws closer to the killer, discovers that he is to be the next victim.

LOVED EXTRAORDINARY PEOPLE? Read book 2 in the series, THE CRITIC
LOVE PETER MAY? Order his new thriller, A SILENT DEATH

A rip-roaring thriller . . . thoroughly enjoyable * Mail on Sunday *
A wonderfully complex book -- Peter James, on Entry Island
He is a terrific writer doing something different * Mark Billingham *
From the first page I knew I was in safe hands. I knew I could trust this writer -- Sophie Hannah
Wonderfully compelling -- Kate Mosse
Western France - now May's own stamping ground - is as much a character in the book as the Hebrides were in his formidable Isle of Lewis sequence * Guardian *
Peter May is a writer I'd follow to the ends of the earth * New York Times *
One of the best regarded crime series of recent years -- Boyd Tonkin, on the Lewis trilogy * Independent *
Lyrical, empathetic and moving -- Alex Gray
May's novels are strong on place and the wounds left by old relationships * Sunday Times *
Will have the reader relishing every tendency of description and characterization -- Barry Forshaw * Independent *
Dark, exciting and atmospheric * Scotland on Sunday *
Powerful and authentic * Glasgow Sunday Herald *
Fast, exciting ... an entertaining read that will also give food for thought * Irish Times *
A tense and atmospheric thriller with a heart-stopping ending * Tangles Web *
Truly the best of May's series so far, this is not to be missed * The Good Book Guide *
Peter May was born and raised in Scotland. He was an award-winning journalist at the age of twenty-one and a published novelist at twenty-six. When his first book was adapted as a major drama series for the BCC, he quit journalism and during the high-octane fifteen years that followed, became one of Scotland's most successful television dramatists. He created three prime-time drama series, presided over two of the highest-rated serials in his homeland as script editor and producer, and worked on more than 1,000 episodes of ratings-topping drama before deciding to leave television to return to his first love, writing novels. He has won several literature awards in France, received the USA's Barry Award for The Blackhouse, the first in his internationally bestselling Lewis Trilogy; and in 2014 was awarded the ITV Specsavers Crime Thriller Book Club Best Read of the Year award for Entry Island. Peter now lives in South-West France with his wife, writer Janice Hally.
GOR005669760
9781782062080
1782062084
Extraordinary People: A stunning cold-case mystery from the #1 bestseller (Enzo 1) by Peter May
Peter May
The Enzo Files
Used - Very Good
Paperback
Quercus Publishing
2014-05-08
448
N/A
Book picture is for illustrative purposes only, actual binding, cover or edition may vary.
This is a used book - there is no escaping the fact it has been read by someone else and it will show signs of wear and previous use. Overall we expect it to be in very good condition, but if you are not entirely satisfied please get in touch with us
Trustpilot