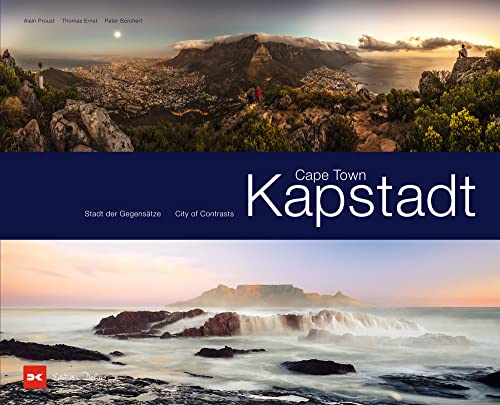 Fascinating Cape Town: A photographic expedition through the city at Africa's south tip. Text in English and German.

Embark on a visually stunning journey through Cape Town and experience the spirit of the Mother City first-hand!

Cape Town rates as one of the most beautiful cities worldwide - and rightly so. Situated between two oceans and a massive mountain, the Mother City close to the Cape of Good Hope unites urban flair and countryside idyll. But it's not just Cape Town's location that is unique: the potpourri of cultures and a fascinating melange of old and new make the metropolis at Africa's southern tip so special.

This illustrated book captures the diversity in exciting pairs and takes you directly to Cape Town's sights and most interesting places. Expert texts and large-format photos arouse wanderlust and curiosity about the city at the foot of the Table Mountain and inspire even locals to go on discovery tours.

Like no other, Alain Proust portrays the different faces of his home of choice. With impressive landscape photos and panoramas he shows the beauty of nature, takes a look at the streets, the alleys and the people of Cape Town. With artistic sensitivity and an extraordinary sense for detail he captures social differences as well as the colours and flavours of South African cuisine.

Text in English and German.