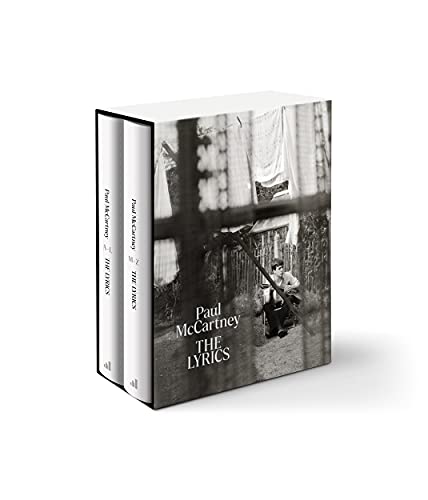 The Lyrics by Paul McCartney

The Lyrics: 1956 to the Present by Paul McCartney

A self-portrait in 154 songs, by our greatest living songwriter

'More often than I can count, I've been asked if I would write an autobiography, but the time has never been right. The one thing I've always managed to do, whether at home or on the road, is to write new songs. I know that some people, when they get to a certain age, like to go to a diary to recall day-to-day events from the past, but I have no such notebooks. What I do have are my songs, hundreds of them, which I've learned serve much the same purpose. And these songs span my entire life.'

In this extraordinary book, with unparalleled candour, Paul McCartney recounts his life and art through the prism of 154 songs from all stages of his career - from his earliest boyhood compositions through the legendary decade of The Beatles, to Wings and his solo albums to the present. Arranged alphabetically to provide a kaleidoscopic rather than chronological account, it establishes definitive texts of the songs' lyrics for the first time and describes the circumstances in which they were written, the people and places that inspired them, and what he thinks of them now. Presented with this is a treasure trove of material from McCartney's personal archive - drafts, letters, photographs - never seen before, which make this also a unique visual record of one of the greatest songwriters of all time.

We learn intimately about the man, the creative process, the working out of melodies, the moments of inspiration. The voice and personality of Paul McCartney sings off every page. There has never been a book about a great musician like it.

Each volume is 480 pp, not available separately

The Lyrics is a triumph. It is hugely readable, devoid of rock cliche, and full of fresh stories and opinions that even devoted fans won't have encountered before. The pictures of McCartney and of handwritten lyrics, many of them never previously published, are worth the entry ticket on their own and the quality of the boxed product makes it a tactile pleasure and fun to possess. All that, and its highly original organisation, means you never get bogged down in a period of his life you don't find interesting ... The Lyrics is McCartney at his best. -- Daniel Finkelstein * The Times *
His composing methodology is revealed as a kind of innocent and endless curiosity ... this mighty tome is billed as the closest thing to an autobiography McCartney will ever write. It comprises 154 songs, with hundreds of fascinating photos and handwritten lyrics from McCartney's collection, and an informal, thoughtful text assembled from conversations conducted with acclaimed Irish poet Paul Muldoon ... McCartney is a playful and brilliant wordsmith ... His book of lyrics is charming -- Neil McCormick * Daily Telegraph *
Reading The Lyrics is like standing in a master chef's kitchen as he prepares a dish, adding a dash of this and a spoonful of that and talking to us so winningly ... there's nothing like listening to Macca (as McCartney was known in his Liverpool days) talk about the rise of a band composed largely of working-class teens who changed the world forever ... charming -- David Kirby * Washington Post *
With a gravity, reverence and sense of occasion that hasn't been seen since the Levites rolled out the Ark of the Covenant, the complete lyrics of Paul McCartney are published at last ... This vast, absorbing book is studded with McCartneyisms that make you rub your eyes -- John Walsh * Sunday Times *
From All My Loving to Your Mother Should Know, the former Beatle illuminates a life spent puzzling how to get from the beginning of a song to its end -- David Hepworth * Observer *
he provides a fascinating new insight into his life at the time they were written, and the lives of his fellow Beatles ... This, then, is a book for dipping into and sampling at leisure. It allows us to see some of the most familiar songs ever written in new and surprising ways ... [it] will not only thrill Beatles obsessives but fascinate anyone who has ever sung along to a Lennon and McCartney tune. Which must, surely, include half the world or more. -- Christopher Stevens * Daily Mail *
a feast for the eyes. Dyed-in-the-wool Beatles fans will be bowled over by the sheer profundity of unpublished photographs, previously unseen lyrics sheets, journal entries, paintings, and the like. Indeed, The Lyrics easily represents the finest collection of illustrations associated with McCartney's life and work. And it's beautifully rendered, to boot. Drop-dead gorgeous as books go -- Kenneth Womack * Salon *
the two things it reveals - an unrelenting work ethic and the picture-painting imperative of the storyteller - are the twin pillars of his life's work, as revealed here in random reflections on 154 selected songs spanning 64 years ... it's this up-front abdication of control, of responsibility and ultimately of authorial meaning that makes McCartney's story, and his open-handed attitude to a monumental body of work, so engaging. -- Michael Dwyer * Sydney Morning Herald *

Paul McCartney (Author)
Born in Liverpool in 1942, Paul McCartney was raised in the city and educated at the Liverpool Institute. Since writing his first song at 14, McCartney has dreamed and dared to be different. He lives in England.