The Rise and Fall of the Great Powers Paul Kennedy 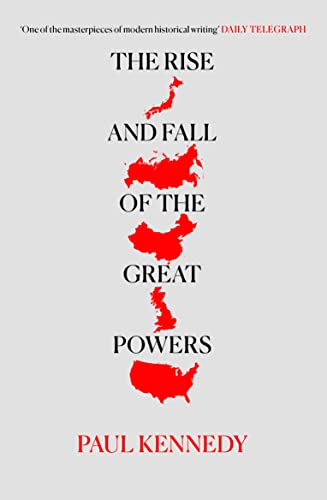 The Rise and Fall of the Great Powers by Paul Kennedy

WINNER OF THE WOLFSON HISTORY PRIZE

Paul Kennedy's international bestseller is a sweeping account of five hundred years of fluctuating economic muscle and military might.

The Rise and Fall of the Great Powers by Paul Kennedy

WINNER OF THE WOLFSON HISTORY PRIZE

Paul Kennedy's international bestseller is a sweeping account of five hundred years of fluctuating economic muscle and military might.

Kennedy's masterwork begins in the year 1500, at a time of various great centres of power including Minh China, the Ottomans, the rising Mughal state, the nations of Europe. But it was the latter which, through competition, economic growth and better military organisation, came to dominate the globe - until challenged later by Japan, the Soviet Union, and the United States. Now China, boosted by its own economic prowess, rises to the fore. Throughout this brilliant work, Kennedy persuasively demonstrates the interdependence of economic and military power, showing how an imbalance between the two has historically led to spectacular political disaster.

Erudite and brilliantly original, The Rise and Fall of the Great Powers is essential reading for anyone with an interest in the politics of power.

'A brilliantly original book...It is intended for the intelligent layman as well as the academic historian, combining in Toynbee-esque manner the sweeping conception with careful attention to historical detail' Financial Times

'This book is falling out of briefcases all over Washington DC, both because it looks and sounds erudite and because it purports to answer an increasingly common question: Has the United States already embarked on its journey into the sunset of empire? It is administering a lot of frissons to trend-watchers' Christopher Hitchens

'Outstanding...He ranges across five centuries and around the whole world. He seems to have read every relevant book in every possible language. And he has produced a general argument so deceptively simple that no politician, however busy, should ignore or misunderstand it' Observer

'One of the masterpieces of modern historical writing' Daily Telegraph

'A masterpiece of exposition. It is erudite and elegantly written' New Society

'A remarkable book...long, clever, often funny, and crammed with remarkable insights; it is tinged with the genius that unravels complexity' Evening Standard

'One of those rare (and irresistible) books which successfully combine the scope and sweep of 'popular' history with the discriminating rigour of professional historiography, making it both a bloody good read and a thought-provoking one' Listener

Paul Kennedy studied at the universities of Newcastle and Oxford and is now professor of history at Yale. His other books include The Rise and Fall of British Naval Mastery and Preparing for the Twenty-first Century.

GOR001236135
9780006860525
0006860524
The Rise and Fall of the Great Powers by Paul Kennedy
Paul Kennedy
Used - Very Good
Paperback
HarperCollins Publishers
19881201
928
N/A
Book picture is for illustrative purposes only, actual binding, cover or edition may vary.
This is a used book - there is no escaping the fact it has been read by someone else and it will show signs of wear and previous use. Overall we expect it to be in very good condition, but if you are not entirely satisfied please get in touch with us
Trustpilot