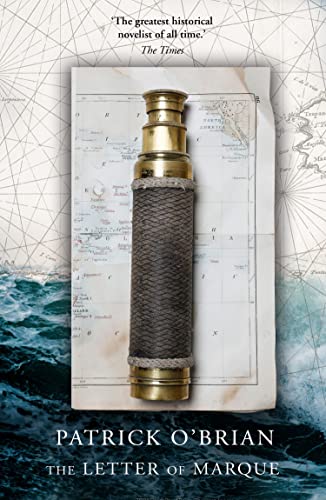 The Letter of Marque by Patrick O'Brian

Patrick O'Brian's Aubrey-Maturin tales are widely acknowledged to be the greatest series of historical novels ever written. To commemorate the 40th anniversary of their beginning, with Master and Commander, these evocative stories are being re-issued in paperback with smart new livery. This is the twelfth book in the series.

The Letter of Marque by Patrick O'Brian

Patrick O'Brian's Aubrey-Maturin tales are widely acknowledged to be the greatest series of historical novels ever written. To commemorate the 40th anniversary of their beginning, with Master and Commander, these evocative stories are being re-issued in paperback with smart new livery. This is the twelfth book in the series.

Jack Aubrey is a naval officer, a post-captain of experience and capacity. When The Letter of Marque opens he has been struck off the Navy List for a crime he has not committed. With Aubrey is his friend and ship's surgeon Stephen Maturin, who is also an unofficial British intelligence agent. Maturin has bought for Aubrey his old ship the Surprise, so that the misery of ejection from the service can be palliated by the command of what Aubrey calls a 'private man-of-war' - a letter of marque, a privateer. Together they sail on a voyage which, if successful, might restore Aubrey to the rank, and the raison d'etre, whose loss he so much regrets.

Around these simple, ostensibly familar elements Patrick O'Brian has written a novel of great narrative power, exploring his extraordinary world once more, in a tale full of human feeling and rarely matched in its drama.

'...full of the energy that comes from a writer having struck a vein... Patrick O'Brian is unquestionably the Homer of the Napoleonic wars.' James Hamilton- Paterson

'You are in for the treat of your lives. Thank God for Patrick O'Brian: his genius illuminates the literature of the English language, and lightens the lives of those who read him.' Kevin Myers, Irish Times

'In a highly competitive field it goes straight to the top. A real first-rater.' Mary Renault

'I never enjoyed a novel about the sea more. It is not only that the author describes the handling of a ship of 1800 with an accuracy that is as comprehensible as it is detailed, a remarkable feat in itself. Mr O'Brian's three chief characters are drawn with no less depth of sympathy than the vessels he describes, a rare achievement save in the greatest writers of this genre. It deserves the widest readership.' Irish Times

GOR001210153
9780006499275
0006499279
The Letter of Marque by Patrick O'Brian
Patrick O'Brian
Used - Very Good
Paperback
HarperCollins Publishers
1997-07-10
352
Winner of Heywood Hill Literary Prize 1995
Book picture is for illustrative purposes only, actual binding, cover or edition may vary.
This is a used book - there is no escaping the fact it has been read by someone else and it will show signs of wear and previous use. Overall we expect it to be in very good condition, but if you are not entirely satisfied please get in touch with us
Trustpilot