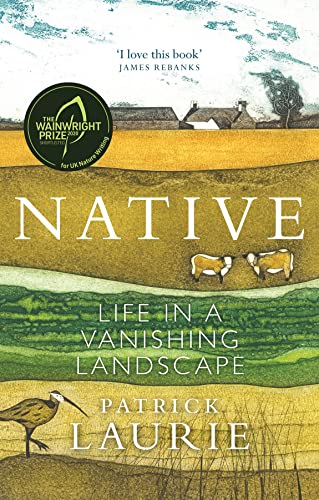 Shortlisted for The Wainwright Prize for UK Nature Writing 2020 and Times Bestseller. Native is poignant and moving book which weaves together folklore and science, tradition and progress to examine how we take what has passed and transform it for the future.

Native: Life in a Vanishing Landscape by Patrick Laurie

Shortlisted for the Wainwright Prize for UK Nature Writing 2020

Desperate to connect with his native Galloway, Patrick Laurie plunges into work on his family farm in the hills of southwest Scotland. Investing in the oldest and most traditional breeds of Galloway cattle, the Riggit Galloway, he begins to discover how cows once shaped people, places and nature in this remote and half-hidden place. This traditional breed requires different methods of care from modern farming on an industrial, totally unnatural scale.

As the cattle begin to dictate the pattern of his life, Patrick stumbles upon the passing of an ancient rural heritage. Always one of the most isolated and insular parts of the country, as the twentieth century progressed, the people of Galloway deserted the land and the moors have been transformed into commercial forest in the last thirty years. The people and the cattle have gone, and this withdrawal has shattered many centuries of tradition and custom. Much has been lost, and the new forests have driven the catastrophic decline of the much-loved curlew, a bird which features strongly in Galloway's consciousness. The links between people, cattle and wild birds become a central theme as Patrick begins to face the reality of life in a vanishing landscape.

'For as long as anyone can remember there have been Lauries farming in Galloway. Native is Patrick Laurie's account of returning home and trying to establish a farm on a 30 acre plot. This is a memoir born out of moments of wonder and pain ... It is not so much a lament for a lost way of being, but the loving story of trying to find it again'

* The Times, Nature Books of the Year *

'He's a keen observer, of nature and of the general ebb and flow of the world, and he writes with a seemingly effortless lyricism about what he sees... A charming evocation of the harsh realities of farming in the modern world, and the difficulties of marrying food production and conservation'

'Laurie has an authentic ability to balance the pains and joys of small farming. ... [Native] works a remarkable balancing act/ the blackened fingernail, bruised by bustling cattle, presses down on a key as richly ambiguous as the curlew's cry'

'A bittersweet portrait of a difficult and disappearing way of life...Rich with the sense of place and balanced between solastalgia and practicality'

'Laurie writes in beautiful detail about the landscape and animals surrounding him. The book represents an ongoing battle between progress and conservation in which the farming industry is integral. A thoughtful read about a man's love of his homeland'

'Remarkable, and so profoundly enjoyable to read ... Its importance is huge, setting down a vital marker in the 21st century debate about how we use and abuse the land'

'Brilliant and Beautiful... This is a book about a place you will probably have never visited: but you should read it nonetheless because what it says has a wider importance, about some of what we have got wrong in the way we respect nature and farming and what we might get right if we change our ways.

it is also that most valuable of things, an escape to an open land where curlew still cry and the wind and rain cut in from the sea and city life feels a million miles away'

'A farmer with a poet's eye is a rare thing indeed, and this is a rare breed of a book: an elegy to a vanishing landscape but one not without hope, and to be greatly treasured'

'Galloway, past and present, is the bedrock of this book, a granite foundation on which Laurie is to build his future... an unflinching account of what it takes to turn into a farmer, bearing callouses, bruises and scars.... moving as well as inspirational. This Galloway farm might be just one stamp in an album, but if a butterfly wing can cause a hurricane, what about a rampaging bull?'

'Native is described as 'a hymn of love to his native land'. It's an apt description for a wonderful book... a poignant and thought-provoking read, I loved it'

'I work at Forum Books in Corbridge and got a proof of this - it's the most incredible book I can recall reading - prose to compare with Macfarlane. Staggering, should win prizes'

'I simply adore this book!'

'Patrick Laurie's neighbours looked on in amusement when he turned the clock back to follow his grandfather's way of rearing cattle. But the old ways are paying off and he is now the proud owner of a thriving rare breed herd - and seen the return of threatened wildlife to his land'

'Patrick Laurie is a wonderful writer. He has written a hymn of love to his native land'

'In this tender, lyrical book, Patrick Laurie considers what it means to really belong to a place. Throughout, the mud, blood and sweat of the farm are brought vividly to life, and each sentence is charged with passion for its subject'

'A young man sets out to work the land like his forefathers and brings Riggit Galloway cattle in to help him. Nature flourishes ... A good read, although Patrick Laurie may also be the type of farmer on the verge of extinction, along with the curlew'

'Patrick Laurie returns to his native Galloway in southwest Scotland, with the sole ambition of farming and raising livestock like his family had before him. Haunted by nature's declining fortunes, he hopes that by bringing back 'the old ways' - mixed farming instead of monocultures, slow-growing rare-breed cattle instead of modern European beef breeds, a sickle and a scythe instead of a combine harvester - he can also bring back the wildlife that once thrived on Galloway's farmland'

'A love song to a way of life, the animals, the birds (particularly the birds) and the landscape'

'With enchanting lyricism throughout, this book will hook you like the long beaks of the little waders themselves as they snaffle up their worms'

Patrick Laurie is a freelance journalist. As well as writing and farming, he works for Soil Association Scotland on a program which supports conservation projects on farmland.

GOR010591206
9781780276205
1780276206
Native: Life in a Vanishing Landscape by Patrick Laurie
Patrick Laurie
Used - Very Good
Hardback
Birlinn General
20200402
256
Short-listed for The Wainwright Prize for UK Nature Writing 2020
Book picture is for illustrative purposes only, actual binding, cover or edition may vary.
This is a used book - there is no escaping the fact it has been read by someone else and it will show signs of wear and previous use. Overall we expect it to be in very good condition, but if you are not entirely satisfied please get in touch with us
Trustpilot