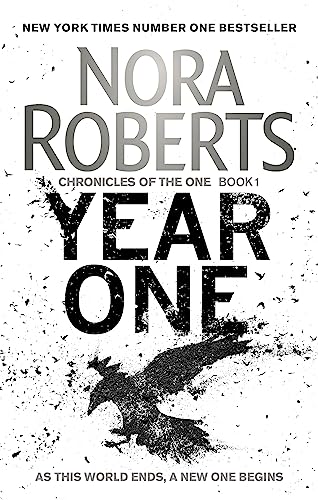 Year One by Nora Roberts

As this world ends, a new one begins. From number one New York Times bestseller Nora Roberts - an epic, apocalyptic tale of good and evil, love and loss.

Year One by Nora Roberts

As this world ends, a new one begins.

From number one New York Times bestseller Nora Roberts - an epic, apocalyptic tale of good and evil, love and loss.

With one drop of blood, the old world is gone for ever. And in its place, something extraordinary begins...

They call it The Doom - a deadly pandemic that starts on a cold New Year's Eve in the Scottish countryside. There's something mysterious about the virus and the way it spreads. As billions fall sick and die, some survivors find themselves invested with strange, unexpected abilities.

Lana, a New York chef, has the power to move things and people with her will. Fred can summon light in the darkness. Jonah, a paramedic, sees snatches of the future in those he touches. Katie gives birth to twins, and suspects that she has brought fresh magic into the world, along with new life.

But The Doom affects people differently. Along with the light, a dark and terrifying magic will also rise. As the remaining authorities round up the immune and the 'Uncannies' for testing, Lana, Katie and others flee New York in search of a safe haven. The old world is over, and Year One has begun.

'A deadly pandemic known as The Doom kicks off in the Scottish countryside. Who doesn't want to read this?' - Emerald Street

Nora Roberts weaves a powerful story of a deadly plague in this gripping, movie-like narrative * Good Housekeeping *
A deadly pandemic known as The Doom kicks off in the Scottish countryside. Who doesn't want to read this? * Emerald Street *
A match for end-of-the-world classics like Stephen King's The Stand * New York Times Book Review *
Roberts knows exactly how to spellbind an audience * The Washington Post *
You'll be hooked * People Magazine *
Electric and ground-breaking. A fast-paced, mesmerising and thought-provoking novel that will no doubt add to Roberts' legions of fans * Kirkus *
Nora Roberts has turned her pen to apocalyptic fiction. And, oh boy, she really delivered . . . fast-paced and energetic * Bustle *
Fascinating characters and a well-built dystopia combine with a riveting plot that will attract a whole new group of readers * Library Journal *
The queen of the best-seller list is kicking off a new trilogy, a foray into dystopian fantasy that may earn the novelist a few gazillion more fans * AARP.org, Best Books of Winter 2018 *
What Roberts has done, with her radical departure, is ensure that she will find new fans among readers attracted to apocalyptic sf and speculative fiction * Booklist *
Nora Roberts is the number one New York Times bestseller of more than 200 novels. With over 500 million copies of her books in print, she is indisputably one of the most celebrated and popular writers in the world. She is both a Sunday Times bestseller in the UK and a number one bestseller in Australia.
GOR009451733
9780349414966
0349414963
Year One by Nora Roberts
Nora Roberts
Chronicles of The One
Used - Very Good
Paperback
Little, Brown Book Group
2018-09-25
448
N/A
Book picture is for illustrative purposes only, actual binding, cover or edition may vary.
This is a used book - there is no escaping the fact it has been read by someone else and it will show signs of wear and previous use. Overall we expect it to be in very good condition, but if you are not entirely satisfied please get in touch with us
Trustpilot