The Book of Trespass Nick Hayes 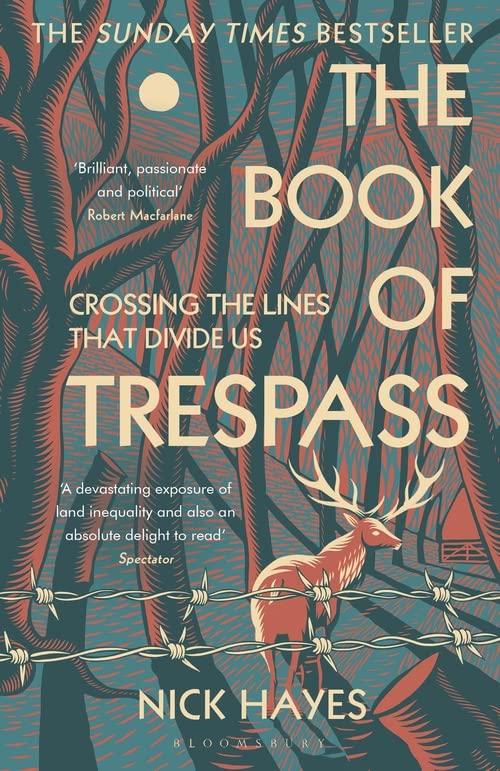 The Book of Trespass by Nick Hayes

The Book of Trespass: Crossing the Lines that Divide Us by Nick Hayes

THE SUNDAY TIMES BESTSELLER A GUARDIAN, I AND SPECTATOR BOOK OF THE YEAR SHORTLISTED FOR THE CWA GOLD DAGGER FOR NON-FICTION 2021 'Brilliant, passionate and political . . . The Book of Trespass will make you see landscapes differently' Robert Macfarlane 'A remarkable and truly radical work, loaded with resonant truths' George Monbiot The vast majority of our country is entirely unknown to us because we are banned from setting foot on it. By law of trespass, we are excluded from 92 per cent of the land and 97 per cent of its waterways, blocked by walls whose legitimacy is rarely questioned. But behind them lies a story of enclosure, exploitation and dispossession of public rights whose effects last to this day. The Book of Trespass takes us on a journey over the walls of England, into the thousands of square miles of rivers, woodland, lakes and meadows that are blocked from public access. By trespassing the land of the media magnates, Lords, politicians and private corporations that own England, Nick Hayes argues that the root of social inequality is the uneven distribution of land. Weaving together the stories of poachers, vagabonds, gypsies, witches, hippies, ravers, ramblers, migrants and protestors, and charting acts of civil disobedience that challenge orthodox power at its heart, The Book of Trespass will transform the way you see the land.
What a brilliant, passionate and political book this is, by a young writer-walker-activist who is also a dazzlingly gifted artist. It tells - through story, exploration, evocation - the history of trespass (and therefore of freedom) in Britain and beyond, while also making a powerful case for future change. It is bold and brave, as well as beautiful; Hayes's voice is warm, funny, smart and inspiring. The Book of Trespass will make you see landscapes differently -- Robert Macfarlane
Seeks to challenge and expose the mesmerising power that landownership exerts on this country, and to show how we can challenge its presumptions . . . The Book of Trespass is massively researched but lightly delivered, a remarkable and truly radical work, loaded with resonant truths and stunningly illustrated by the author -- George Monbiot * Guardian *
A powerful new narrative about the vexed issue of land rights . . . Hayes [is] practically a professional trespasser these days, no sign too forbidding to be ignored, no fence too high to be climed . . . The Book of Trespass is [Hayes's] first non-graphic book - though the text is punctuated by his marvellous illustations, linocuts that bring to mind the Erics, Gill and Ravilious - and in it, he weaves several centuries of English history together with the stories of gypsies, witches, ramblers, migrants and campaigners, as well as his own adventures. Its sweep is vast * Observer *
Brilliantly argued, The Book of Trespass explores with clarity and courage an ancient problem in radically new ways . . . Hayes unearths the psychological preconditions that empower and legitimise these monumental inequalities -- Mark Cocker * New Statesman *
Exhilarating . . . A gorgeously written, deeply researched and merrily provocative tour of English landscape, history and culture -- Boyd Tonkin * Arts Desk *
Hayes is an alert, inquisitive observer . . . He works also in the tradition of nature writers like Robert Macfarlane ... This sensibility gives him a poetic sense of the different ways that we might use and share the land to the benefit of all . . . Beyond its demand for specific, concrete changes to the law on what land we may step onto and for what purposes, this book is a call for a re-enchantment of the culture of nature * Tribune Magazine *
Hayes is practised at pushing through overgrown thickets of law to uncover hidden structures of power and privilege. His book's historical range stretches across centuries . . . The Book of Trespass is incisive, impassioned and beautifully written * Times Literary Supplement *
A trespasser's radical manifesto . . . A book dedicated to demolishing boundaries of all kinds . . . Each chapter includes a double-page black-and-white landscape, rendered with a thrilling air of motion and immediacy . . . Hayes has picked apart the meaning of trespass and brilliantly redefined it as an act of solidarity * Guardian *
A stirring appeal for us to freely access the land closed off to the public . . . By trespassing on the land, Hayes takes us on a roller-coaster ride through history . . . His book is an example of nature writing at its best but it has real political bite ... [A book] to relish and learn from * Morning Star *
Nick Hayes is an author, illustrator, print-maker and political cartoonist. He has published four graphic novels with Jonathan Cape and has worked for, among others, the Literary Review, Time Out, the British Council, the New Statesman and the Guardian. He has exhibited across the country, including at the Hayward Gallery. He lives in London.
NGR9781526604729
9781526604729
1526604728
The Book of Trespass: Crossing the Lines that Divide Us by Nick Hayes
Nick Hayes
New
Paperback
Bloomsbury Publishing PLC
20210708
464
N/A
Book picture is for illustrative purposes only, actual binding, cover or edition may vary.
This is a new book - be the first to read this copy. With untouched pages and a perfect binding, your brand new copy is ready to be opened for the first time
Trustpilot