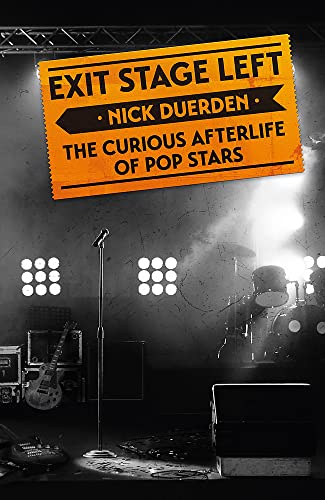 A quirky, thought-provoking look at the curious afterlife of pop stars.

'Exit Stage Left is the book I've long wanted to read about the PTSD-like after-effects of pop stardom - and Nick Duerden is the perfect writer for the job. The pop star's bittersweet lot - the mass adoration that comes with pop stardom, followed by the bathetic comedown of what inevitably follows - is represented with flair and empathy.' - Pete Paphides, author of Broken Greek

'Tragedy, genius, addiction and inspiration: Exit Stage Left is a comprehensive tour through all the ways life can go wrong post-fame (and the few ways it can go right). Funny, poignant and often inspirational.' - Mat Osman


'Fame is the brightest candle, but in this brilliant collection of interviews, Nick Duerden answers the question: what does a candle do after it's burned out?' - David Quantick

The desire for adulation is a light that never goes out. We live in a culture obsessed by the notion of fame - the heedless pursuit of it; the almost obligatory subsequent fallout. But what's it like to actually achieve it, and what happens when fame abruptly passes, and shifts, as it does, onto someone else?

This is the world the pop star is required to inhabit. It's invariably eventful. We know all about them when they're at the top of their game, of course, but they tend to reveal far more of their true selves once they've peaked, and are on their way down. This is the point at which they are at their most heroic, because they don't give up. They keep on striving, keep making music, and refuse simply to ebb away. Some sustain themselves on the nostalgia circuit, others continue to beaver away in the studio, no longer Abbey Road, perhaps, so much as the garden shed. But all of them, in their own individual ways, still dare to dream.

Exit Stage Left features tales of drug addiction, bankruptcy, depression and divorce, but also of optimism, a genuine love of the craft, humility and hope. This is a candid, laugh-out-loud and occasionally shocking look at what happens when the brightest stars fall back down to earth.

Fascinating layers of humanity, pathos and wisdom. * Frank Turner *
Brilliant * David Quantick *
The pop-star's bittersweet lot is represented with flair and empathy. * Pete Paphides *
This is a candid and at times, laugh-out-loud look at the curious afterlife of pop stars. * Surrey Life *
Nick Duerden is a writer and freelance broadsheet journalist. He has written widely on the arts, family and health, and is the author of two novels, a memoir on fatherhood, and other non-fiction works.
NGR9781472277770
9781472277770
1472277775
Exit Stage Left: The curious afterlife of pop stars by Nick Duerden
Nick Duerden
New
Hardback
Headline Publishing Group
2022-04-28
384
N/A
Book picture is for illustrative purposes only, actual binding, cover or edition may vary.
This is a new book - be the first to read this copy. With untouched pages and a perfect binding, your brand new copy is ready to be opened for the first time
Trustpilot