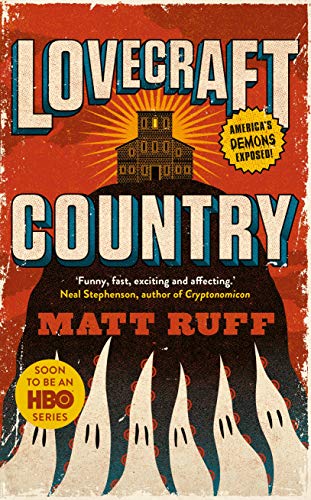 Matt Ruff, the critically acclaimed cult novelist, makes visceral the terrors of life in Jim Crow America and its lingering effects in this brilliant and wondrous work of the imagination that melds historical fiction, pulp noir, and Lovecraftian horror and fantasy.

Soon to be a new HBO Series from J.J. Abrams, Misha Green and Jordan Peele (Director of Get Out)

Chicago, 1954. When his father Montrose goes missing, twenty-two year-old Army veteran Atticus Turner embarks on a road trip to New England to find him, accompanied by his Uncle George - publisher of The Safe Negro Travel Guide - and his childhood friend Letitia. On their journey to the manor of Mr. Braithwhite - heir to the estate that owned one of Atticus's ancestors - they encounter both mundane terrors of white America and malevolent spirits that seem straight out of the weird tales George devours.

At the manor, Atticus discovers his father in chains, held prisoner by a secret cabal named the Order of the Ancient Dawn - led by Samuel Braithwhite and his son Caleb - which has gathered to orchestrate a ritual that shockingly centers on Atticus. And his one hope of salvation may be the seed of his - and the whole Turner clan's - destruction.

A chimerical blend of magic, power, hope, and freedom that stretches across time, touching diverse members of two black families, Matt Ruff's Lovecraft Country is a devastating kaleidoscopic portrait of racism - the terrifying specter that continues to haunt us today.

Lovecraft Country takes the unlikeliest of premises and spins it into a funny, fast, exciting, and affecting read -- Neal Stephenson, author of Snow Crash and Cryptonomicon
At every turn, Ruff has great fun pitting mid-twentieth-century horror and sci-fi cliches against the banal and ever present bigotry of the era * New York Times Book Review *
A brilliantly conceived story brilliantly executed -- Christopher Moore, author of Lamb and A Dirty Job
Lovecraft Country doesn't just race along, it tears, demanding that you keep turning its pages without interruption -- Cory Doctorow, author of Little Brother
Smartly subversive pulp horror . . . beautifully structured . . . what shines through is solidarity, conscience and not backing down in the face of wickedness -- Guardian
Great fun. You can see why Lovecraft Country has been optioned by HBO for a TV series . . . None of the book's other-worldly encounters feel as dangerous as those moments when a black character runs afoul of a tired police officer or vicious sheriff -- Telegraph
Ruff 's worldbuilding is a blend of magic, researched realism, and adventure story -- LA Review of Books
Nonstop adventure that includes time-shifting, shape-shifting, and Lovecraft-like horrors . . . Ruff, a cult favorite for his mind-bending fiction, vividly portrays racism as a horror worse than anything conceived by Lovecraft in this provocative, chimerical novel -- Booklist
Genuinely spooky . . . But the real horror is the reality of life for African-Americans in the Jim Crow era . . . sparks the imagination while also igniting the reader's empathy -- Library Journal
The slippery dialogue and suspense-soaked prose make Lovecraft Country - a challenge to one of the most recognizable legacies in science fiction - worth every dime -- Chicago Review of Books
Wonderful from page one . . . Matt Ruff is one of the gentlest, wildest writers of fantastic fiction -- John Crowley, author of Little, Big
Matt Ruff was born in 1965 in Queens, New York. He is the author of the award-winning novels Fool on the Hill, Set This House in Order and Bad Monkeys. His novel, Lovecraft Country, was nominated for the World Fantasy Award in 2017 in the novel category and has been greenlit as an HBO series. Matt lives in Seattle, Washington with his wife.
Chapter - 1: LOVECRAFT COUNTRY Chapter - 2: DREAMS OF THE WHICH HOUSE Chapter - 3: ABDULLAH'S BOOK Chapter - 4: HIPPOLYTA DISTURBS THE UNIVERSE Chapter - 5: JEKYLL IN HYDE PARK Chapter - 6: THE NARROW HOUSE Chapter - 7: HORACE AND THE DEVIL DOLL Chapter - 8: THE MARK OF CAIN Section - i: EPILOGUE Acknowledgements - ii: ACKNOWLEDGMENTS
GOR009945400
9781509883356
1509883355
Lovecraft Country by Matt Ruff
Matt Ruff
Used - Very Good
Paperback
Pan Macmillan
2019-02-27
384
Short-listed for World Fantasy Awards Best Novel 2017 (UK)
Book picture is for illustrative purposes only, actual binding, cover or edition may vary.
This is a used book - there is no escaping the fact it has been read by someone else and it will show signs of wear and previous use. Overall we expect it to be in very good condition, but if you are not entirely satisfied please get in touch with us
Trustpilot