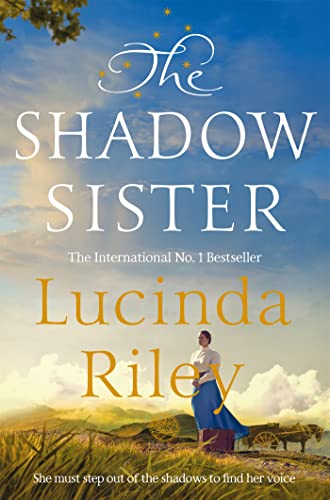 The Shadow Sister by Lucinda Riley

The third spellbinding story in the bestselling Seven Sisters series by Lucinda Riley.

The Shadow Sister by Lucinda Riley

Following on from the bestselling The Seven Sisters and The Storm Sister, The Shadow Sister is the third book in Lucinda Riley's spellbinding series of love and loss, loosely based on the mythology of the Seven Sisters star cluster.

Star D'Apliese is at a crossroads in her life after the sudden death of her beloved father - the elusive billionaire, named Pa Salt by his six daughters, all adopted by him from the four corners of the world. He has left each of them a clue to their true heritage, but Star - the most enigmatic of the sisters - is hesitant to step out of the safety of the close relationship she shares with her sister CeCe. In desperation, she decides to follow the first clue she has been left, which leads her to an antiquarian bookshop in London, and the start of a whole new world . . .

A hundred years earlier, headstrong and independent Flora MacNichol vows she will never marry. She is happy and secure in her home in the Lake District, living close to her idol, Beatrix Potter, when machinations outside of her control lead her to London, and the home of one of Edwardian society's most notorious players, Alice Keppel. Flora is pulled between passionate love and duty to her family, but finds herself a pawn in a game - the rules of which are only known to others, until a meeting with a mysterious gentleman unveils the answers that Flora has been searching for her whole life . . .

As Star learns more of Flora's incredible journey, she too goes on a voyage of discovery, finally stepping out of the shadow of her sister and opening herself up to the possibility of love.

The epic multi-million selling series continues with The Pearl Sister.

Wonderful! Absolutely impossible to put down! The Seven Sisters books just keep getting better and better -- Tracy Rees, author of Amy Snow
A deliciously twisting plot with clues cleverly paced along the way. I could hardly wait to solve the mystery of Star's origins. Thoroughly addictive storytelling with a moving, emotional heart -- Dinah Jefferies, author of The Tea Planter's Wife
The Shadow Sister really is Lucinda's best yet. The scope of this series is breathtaking and each book is more captivating than the last -- Iona Grey, author of Letters to the Lost
[An] engaging and mesmerizing story of self-discovery and love * Library Journal *

Lucinda Riley was born in 1965 in Ireland, and after an early career as an actress in film, theatre and television, wrote her first book aged twenty-four. Her books have been translated into thirty-seven languages and continue to strike an emotional chord with all cultures around the world. The Seven Sisters series specifically has become a global phenomenon, creating its own genre, and there are plans to create a seven-season TV series.

Her books have been nominated for numerous awards, including the Italian Bancarella prize, The Lovely Books award in Germany, and the Romantic Novel of the Year award. In 2020 she received the Dutch Platinum award for sales over 300,000 copies for a single novel in one year - an award last won by J K Rowling for Harry Potter.

In collaboration with her son Harry Whittaker, she also devised a series of books for children called The Guardian Angels series, based on stories told to her children whenever they were facing a challenging situation. Harry then wrote the books, and they are now being published internationally.

Though she brought up her four children mostly in Norfolk in England, in 2015 she fulfilled her dream of buying a remote farmhouse in West Cork, Ireland, which she always felt was her spiritual home, and indeed this was where her last five books were written.

Lucinda was diagnosed with cancer in 2017 and died on June 11th 2021, surrounded by her family.

GOR009931637
9781529005240
1529005248
The Shadow Sister by Lucinda Riley
Lucinda Riley
The Seven Sisters
Used - Very Good
Paperback
Pan Macmillan
20190321
720
N/A
Book picture is for illustrative purposes only, actual binding, cover or edition may vary.
This is a used book - there is no escaping the fact it has been read by someone else and it will show signs of wear and previous use. Overall we expect it to be in very good condition, but if you are not entirely satisfied please get in touch with us
Trustpilot