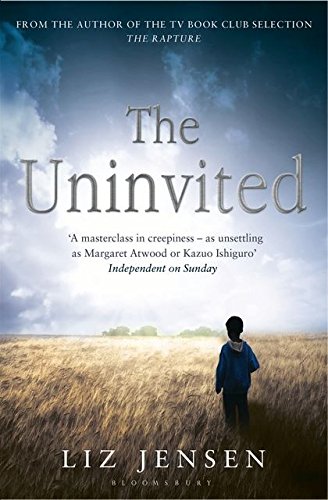 The Uninvited by Liz Jensen

An environmental disaster movie of a thriller, from the celebrated author of The Ninth Life of Louis Drax

The Uninvited by Liz Jensen

A seven-year-old girl puts a nail-gun to her grandmother's neck and fires. An isolated incident, say the experts. The experts are wrong. Across the world, children are killing their families. Is violence contagious? As chilling murders by children grip the country, anthropologist Hesketh Lock has his own mystery to solve: a bizarre scandal in the Taiwan timber industry. Hesketh has never been good at relationships: Asperger's Syndrome has seen to that. But he does have a talent for spotting behavioural patterns, and an outsider's fascination with group dynamics. Nothing obvious connects Hesketh's Southeast Asian case with the atrocities back home. Or with the increasingly odd behaviour of his beloved step-son, Freddy. But when Hesketh's Taiwan contact dies shockingly and more acts of sabotage and child violence sweep the globe, he is forced to acknowledge possibilities that defy the rational principles on which he has staked his life, his career and, most devastatingly of all, his role as a father. Part psychological thriller, part dystopian nightmare, The Uninvited is a powerful and viscerally unsettling portrait of apocalypse in embryo.
Extraordinary ... A hugely inventive generic hybrid, part-crime thriller, part morality tale, that dances along the borders of SF -- Arifa Akbar * Independent *
There is no question that The Uninvited makes for a gripping read ... she is a great British author with a talent for brilliantly written and truly original tales * Daily Express *
Expertly paced, combining moments of chilling horror with deadpan comedy, this audacious novel is utterly gripping -- Stephanie Cross * Daily Mail *
In the course of eight inventive, provocative novels, Jensen has carved out a fictional space dense with elements of fantasy and thriller, satire and SF, science and cod-science, but entirely her own. The mainstream is moving towards her, rather than the other way around ... The book is so tightly wrought that even the recurrent phrase "not yet", which Hesketh teaches Freddy to append whenever anyone says "I don't know" as an earnest of the forward march of knowledge, comes to have a dark second meaning ... chilling -- Justine Jordan * Guardian *
Psychologically rich and consistently thought-provoking ... always absorbing -- John Dugdale * The Sunday Times *
A masterclass in creepiness - as unsettling as Margaret Atwood or Kazuo Ishiguro but with modern detail such as Skype calls, industrial espionage and Twitter. It is this hybrid of haunted souls and capitalist cautionary tale that gives the novel its power -- Alexandra Heminsly * Independent *
Like Jensen's previous novel, The Rapture, this is as dazzling as it is unsettling * Voyager *
We Need to Talk About Kevin meets The Children of Men in this literary thriller from the author of The Rapture. As the unsettling story unfolds, delayed flights will be no problem with this in your bag * Elle, Summer Reads *
Recalling Margaret Atwood's haunting The Handmaid's Tale ... A compelling, poetic and subtle psychological thriller -- Rebecca Wallersteiner * The Lady *
This brilliantly odd thriller mixes the quirky charm of The Curious Incident of The Dog in the Nighttime with the sci-fi strangeness of Doctor Who ... You'll be kept guessing until the final pages * Easy Living *
I've never read anything like this. Chilling, and thought-provoking, this book offers a vision of a future where things go badly wrong. This is a psychological thriller written by an author with precision timing and a innate talent for the genre. There is an unsettling mix here, of compassion and humanity, along with ideas that are difficult to comprehend - children killing adults. Compelling to read, difficult to put down, Liz Jensen's new novel is both terrifying and redemptive * Monique Roffey, author of The White Woman on the Green Bicycle *
Liz Jensen is the bestselling author of seven acclaimed novels, including the Guardian-shortlisted Ark Baby, War Crimes for the Home, The Ninth Life of Louis Drax and, most recently, The Rapture, shortlisted for the Brit Award and selected as a Channel 4 TV Book Club Best Read. She has been nominated three times for the Orange Prize for Fiction and her work has been published in more than twenty countries. Liz Jensen lives in Wimbledon, London.
GOR004739389
9781408817735
140881773X
The Uninvited by Liz Jensen
Liz Jensen
Used - Very Good
Paperback
Bloomsbury Publishing PLC
2013-04-11
320
N/A
Book picture is for illustrative purposes only, actual binding, cover or edition may vary.
This is a used book - there is no escaping the fact it has been read by someone else and it will show signs of wear and previous use. Overall we expect it to be in very good condition, but if you are not entirely satisfied please get in touch with us
Trustpilot