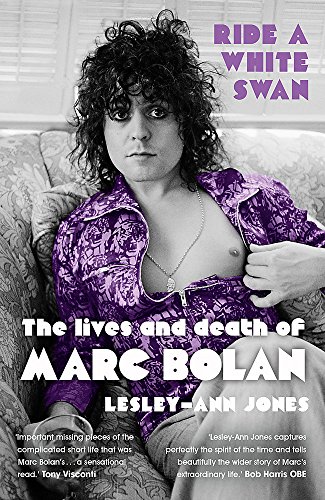 Ride a White Swan: The Lives and Death of Marc Bolan by Lesley-Ann Jones

*** By the Sunday Times bestselling author of BOHEMIAN RHAPSODY ***

From mod folk artist to flower power pixie elfin to the king of glam rockers, Marc Bolan was the ultimate chameleon. His far-reaching musical and stylistic influence is more relevant today than ever with hits such as 'Ride A White Swan', 'Children Of The Revolution', 'Get It On' and 'Hot Love' as fresh and exhilarating as when first released.

At the peak of his popularity during his lifetime Bolan was outselling Jimi Hendrix and The Who, and yet relatively little is really known about the hypnotic, enigmatic 20th century boy turned 21st century icon. At last, in the 35th anniversary year of his tragic death, Marc Bolan represents the definite biography.

Here rock biographer, Lesley-Ann Jones, paints a meticulous portrait of the T-Rex front man. From his childhood growing up in Hackney to his untimely death at the age of 29, Bolan's life was one of relentless experimentation and metamorphoses. Hallucinogenic drugs, wizardry and levitation, alcoholism, tax evasion and a spectacular fall from grace were to punctuate his short life, as he continued to strive to reinvent himself and his music over and over again.

Lesley-Ann has been granted access to those who knew Bolan best, including his partner and the mother of his only son, Gloria Jones and his brother, Harry Feld.

'this is THE Marc Bolan biography . . . balanced rather than sensationalist, something the Bolan fan base will appreciate.' * Classic Rock Radio *
'Heartfelt and fascinating.' * Bob Harris OBE *
'Important missing pieces of the complicated short life that was Marc Bolan's. It is a sensational read.' * Tony Visconti *
'This book is a great read. Bolan was one of the most enigmatic and important performers of his age.' * Frank Allen (of The Searchers) *
'Brimming with insight from family members, friends, managers, musicians and white-knuckled rock and rollercoaster riders who shared the dips and dives of Bolanmania, this book is a cracker of a read.' * Keith Altham, Rock writer and press agent, The Who, The Rolling Stones, The Beach Boys, The Small Faces, Van Morrison and Marc Bolan *
Lesley-Ann Jones brings my old friend almost back to life in this brilliantly observed and detailed account of a fascinating man who lived an all-too-short life. The first book to show us the real Marc. * Steve Harley *
Lesley-Ann Jones is a journalist, newspaper columnist and broadcaster. The author of eight published books, she has enjoyed more than twenty-five years in music and the media. She lives in South-East London with her young children, the eldest having grown up and gone into the music business.
GOR005356479
9781444758795
1444758799
Ride a White Swan: The Lives and Death of Marc Bolan by Lesley-Ann Jones
Lesley-Ann Jones
Used - Very Good
Paperback
Hodder & Stoughton
20130523
400
N/A
Book picture is for illustrative purposes only, actual binding, cover or edition may vary.
This is a used book - there is no escaping the fact it has been read by someone else and it will show signs of wear and previous use. Overall we expect it to be in very good condition, but if you are not entirely satisfied please get in touch with us
Trustpilot